NBC’s “The Voice” Censors ‘Lord’ Out Of “Will The Circle Be Unbroken?” 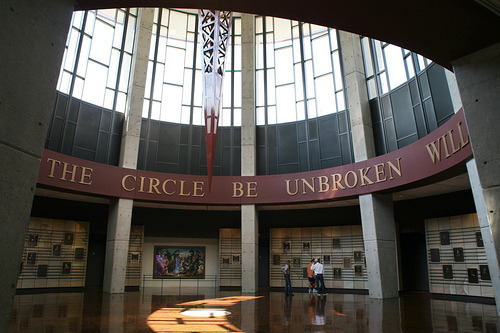 NBC’s hit reality singing competition The Voice is in hot water from country and gospel fans, people of faith, and general haters of censorship when on the Tuesday (Nov. 26th) installment of the show, they purposely censored the word ‘Lord’ out of the iconic country gospel song “Will The Circle Be Unbroken?”

The final 8 contestants on the show performed “Will The Circle Be Unbroken?” with Seattle’s Starbucks Chorus backing them up to raise money for charity. But in the version of the song the chorus and contestants performed, ‘oh’ was swapped for ‘Lord’ in the portion of the song that goes, “in the sky, Lord, in the sky.” They also skipped verses mentioning ‘Savior’ and ‘Heaven.’

“Will The Circle Be Unbroken?” is often referred to as one of the main foundations for country music, and ranked at #5 on Saving Country Music’s Greatest Country Songs of All Time. It is not just a staple of the American gospel songbook, it is also the inspiration behind the architecture of the Country Music Hall of Fame rotunda where the plaques for all of the inductees are found.

Country artist Blake Shelton who is a judge on The Voice was apparently not too happy with the decision either, telling Zap 2 it after the show:

I don’t know what, uh — how it happened, or — I’m learning about it just like you guys are. I was sitting in my chair singing that song how I grew up on it, with ‘in the sky, Lord, in the sky.’ I sang it as loud as I could. And that might be why I didn’t realize until after the fact that ‘Lord’ was either taken out, or it was just performed some other way…I know it was performed — and it’s meant for a good cause, and they’re trying to raise some money. And that’s a good thing. But I will say, that’s not the version I grew up on. And that’s not the version I was singing sitting in my chair, if that clears up anything [about] where I stand on this thing.

The Voice executive producer Mark Burnett initially seemed just as disappointed with the decision as Blake Shelton, saying, “Especially for those of us who know this song from church so well … I realized immediately what had happened. I thought I’d misheard on the sound. Then came the next chorus, and I’m like, ‘OK, it’s live TV, so I’ve got to wait until the next commercial break. I’m running over there and asking the question.”

But later Burnett back peddled, saying The Voice had to use an older version of the song so it could be given away for free on iTunes. “My mistake was I assumed that the public domain version has the word ‘Lord’ in it,” said Burnett. Some older versions of “Will The Circle Be Unbroken?” which is a traditional song residing in the public domain, do not include “Lord” in the lyrics, but most modern country and gospel versions do.

But this doesn’t explain why the verses with ‘Savior’ and ‘Heaven’ were also omitted from the performance, and why ‘oh’ was added, when the traditional version of the song doesn’t say ‘Lord’ at all, meaning it wouldn’t need to be replaced with anything. The censoring of the lyrics appears to be a conscious decision by someone at The Voice or NBC not wanting to offend anyone from the religious connotations, regardless of the rights issues surrounding the song.