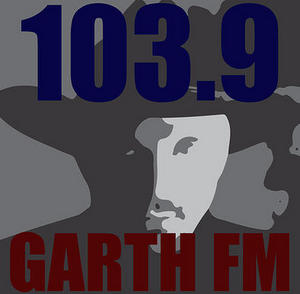 Do you like Garth Brooks? Do you really like Garth Brooks? To the point where you’re so smitten with Garth’s music you’d be inclined to listen to it 24/7 and nothing else? Well then your in luck neighbor, because a new radio station has just popped up called GARTH-FM in Louisville, KY at 103.9 on the dial, serving the surrounding area and the entire world via the internet with Garth, and Garth only. The station’s slogan is “Garth, The Whole Garth, and Nothing But The Garth.”

The format change for the Summit Media-owned radio station happened over the Memorial Day weekend. It was first thought to be what’s known in the radio station business as “stunting”—where a station will play the same song, or maybe the same artist over and over to draw attention ahead of a format change. But the commitment to GARTH-FM goes much deeper, or that’s what they’re saying at the moment. “There has been attention both inside and outside the industry recently regarding the absence of Garth on country radio these days,” Summit Media Louisville Operations Manager Shane Collins says, citing a recent Inside Radio article on the subject. “We really feel like there is a gap here that needs to be filled.”

Now that gap will be filled in a big way, and 103.9 GARTH-FM will be the first full service radio station to solely play one artist. Illustrating the station’s commitment to Garth, they’ve set up garthlouisville.com and 1039garthfm.com to stream the station online.

The launching of GARTH-FM adds an interesting wrinkle to the discussion of a potential upcoming format split for country music, with Top 40 country, and “classic” country from the last 25 years going their separate ways. Rumors that this reality might be in the offing were stimulated when Big Machine Records struck a deal with radio giant Cumulus Media to start a new NASH Icons venture.

Another interesting note is that the radio station format that GARTH-FM is replacing was already playing classic country. The previous “Country Legends 103.9” established on July 23rd, 2008 touted “playing hits from Johnny Cash, Willie Nelson and Randy Travis.” This creates the question if a potential paradigm shift of country radio into two formats will potentially cannibalize under-performing classic or traditional radio stations that play music beyond this all-of-a-sudden magic 25-year “classic” country window, when big artists like Garth Brooks started their commercial ascent. There is also the possibility that as time goes on, GARTH-FM, just like many stations, could morph into this new 25-year “classic” country format and cover multiple artists.

When we look back, the changeover to GARTH-FM could be a symbolic moment where the cleaving of country music into two formats began …. or a silly idea that was short lived.

UPDATE: Director of Marketing for Summit Media in Louisville, Brian Eichenberger says, “May we add in other artists at some point? That’s highly possible. But right now we really want to make a statement about, ‘What happened to the 90”²s? Let’s bring them back.’ And here’s Garth to do it.” READ FULL UPDATE