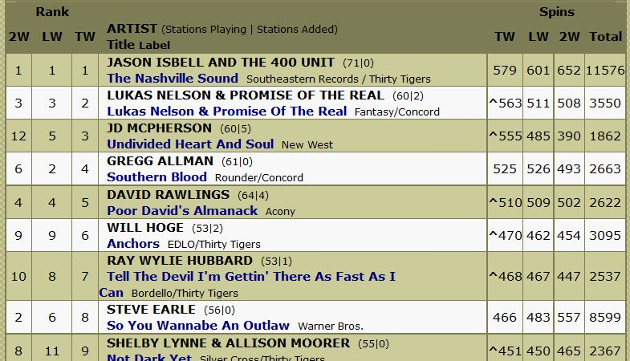 As the Americana genre continues to expand market share for the independent industry, and is aided by the success of big stars such as Jason Isbell, so expands the need for better infrastructure and accountability in the format. In 2016 we saw Billboard revamp their folk chart to included the Americana designation for albums, and recognize the increased importance of Americana as an influential music format, and an emerging economic force. Now the way the radio chart for Americana operates is about to be recalibrated as well.

The method Americana radio has been ranked heretofore has been a bit unreliable, labor intensive, and with a likelihood for either error or manipulation, making it an interesting footnote for the format as opposed to a true barometer of the rising and falling nature of artists or songs. Strictly tabulated off reports from DJs and program directors at Americana stations that must be physically filled out, it allowed for mistakes to be made, spins to be overlooked, or even the possibility of “paper spins” to enter into the tabulations—meaning plays that didn’t actually happen on the air, but were still reported for whatever reason. Though few believe fraud is rampant in Americana radio reporting, it’s certainly a possibility under the current format, while some stations don’t report their Americana spins at all due to the clerical burden.

Also making the current format of the Americana radio chart a bit confusing is the fact that it’s not tabulated via the songs radio stations play, but albums from where the songs originate. For example, the current #1 on the Americana Radio Chart is Jason Isbell’s most recent album The Nashville Sound, not a specific song off the album, like “If We Were Vampires.” This leaves the public, the Americana industry, and other DJs guessing at the most popular songs being played on radio as opposed to verified info.

But all that is set to change on January 1st when Americana will implement an automated system to digitally count all the songs played in the format, and report it in a proper radio chart. Powered by the technology company CDX which has been servicing songs to radio for years, their system will use the online streams of Americana radio stations and their proprietary song identification system to track plays of Americana songs in real time, and aggregate them into weekly charts. The company is currently is operating a similar system in the Texas Music space, and offers a similar service for mainstream country.

Called CDX-Traction, the system listens to at least one minute of each song (one minute just in case a snippet of a song is used in a commercial or intro), and through song identification technology, logs the play into the system. Along with populating the radio chart, CDX will allow industry professionals access to that data, including artists managers, record labels, and booking agents, to help artists in multiple ways, and determine the traction of a song.

Managers, booking agents, journalists, and artists themselves can see what songs and artists are being played, where and when, and how those songs are behaving in certain markets, or with certain stations. This can be invaluable information in many fields of the music industry. For example, if an artist is wondering how to route a tour, they can use the information in the CDX system to see what markets are playing their music, and where there may be more familiarity with listeners in a given location. It can also be an invaluable to gauge the appeal of a certain song. The new approach could also allow artists to have a more singles-based approach to releasing music if they so choose.

Though the new system will make great strides in eliminating errors and the effort DJs must go through to report their spins, it does come with its detractors. Some are worried that going away from an album-based chart and focusing more on songs is an encroachment of the short attention span/Spotify approach to music as opposed to the cohesive narrative of an album that most Americana artists adhere to. There will still be an Americana album chart to track the performance of cohesive projects as well.

Another concern—and one that has cropped up in Billboard’s Americana Albums Chart—is how AAA, or Adult Album Alternative spins within the format might bury some of Americana’s true artists under the plays of acts such as Ryan Adams, Jack Johnson, Ed Sheeran, and others that are currently being found on Billboard’s Americana chart for their acoustic, folk-style approach compared to the rest of pop music.

Just like the current Billboard Americana Albums Chart, there will probably be the need for tweaking the chart once it is launched. The public implementation of the chart has already been delayed to make sure when it does goes live that it will be accurate and useful for the Americana community. Joe Kelly of CDX spoke at length about the new system on Thursday, September 14th as part of 2017 AmericanaFest, giving a presentation of how the system works, and answering questions from DJs and radio promoters within the Americana industry. The Americana radio chart is published by the Americana Music Association.