Bruce Robsion’s ‘The Next Waltz’ project from The Bunker studio located at his property in Lockhart, TX has really busy lately, including being linked to a new supergroup called The Panhandlers who are promising some sort of recording project to be released in 2020. But in the interim, The Next Waltz will be releasing a new compilation album called The Next Waltz Volume 2 on November 29th that will include quite a few cool names releasing original songs and unique covers.

Though all the names and songs are worth getting excited over, it’s the presence of Turnpike Troubadours frontman Evan Felker who leads off the compilation with a song called “Whiskey in Your Water” that has a lot of people talking. It’s a song you won’t be able to get anywhere else than the compilation, and includes Carrie Rodriguez singing with Evan.

When some saw the compilation track list, they wondered if this was a signal that Evan Felker has gone solo. However the track was recorded in April, before the band announced their indefinite hiatus on May 31st. Either way, the track will help to tide Turnpike Troubadours fans over until a reunification of the band (hopefully) occurs.

“It really is a representation of what we’re trying to do here, which is connecting the greatest music in Austin with country music in a greater sense,” Bruce Robison says about the upcoming compilation. Carrie Rodriguez has her own track on the compilation as well called “Edge of the Colorado” that she wrote with Bruce Robison. The two are backed by Austin’s Grammy-nominated bluegrass band, Wood & Wire, who also contribute a song to the new album.

As for any info or rumors about the current state of affairs for Evan Felker or the Turnpike Troubadours, unfortunately there’s no new news on that front at the moment, though you can catch Turnpike guitarist Ryan Engleman touring with Reckless Kelly. Bassist and songwriter RC Edwards has been busy with his side project RC and the Ambers, which has been playing numerous shows around Oklahoma recently, and fiddle player Kyle Nix has also played with them upon occasion.

The Next Waltz Volume 2 is now available for pre-order, and you can find the track list and a preview video that includes clips of many of the songs below. All songs were recorded analog at The Bunker, and the cover art was done by Kerry Awn. 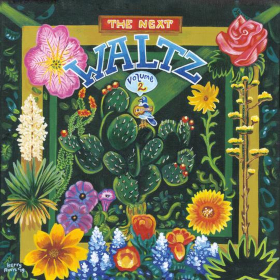