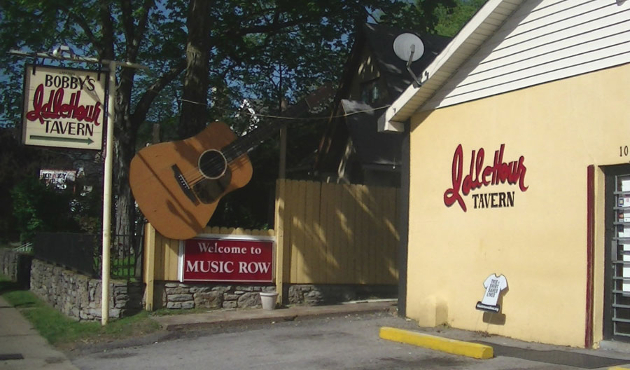 It was revealed last month that Music Row’s last true songwriter venue and dive bar Bobby’s Idle Hour has become the latest landmark on Nashville’s Music Row to come under threat from proposed redevelopment. A favorite of songwriters and some performers since the 60’s, it has sat smack dab in the middle of Music Row for the last decade in its current location. Now the lot Bobby’s sits on with five other adjacent properties is currently being eyed by Panattoni Development Company Inc. for a new office building.

“It’s just destroying the character of Music Row,” says Thom Case, aka “Lizard,” who is the current owner of Bobby’s Idle Hour. The names of famous songwriters who’ve played the spot are too numerous to list, as are the songs tested between those four walls before they became hits. “Building another big building and tearing down the sacred ground of Nashville, that destroys something when we take that away. I don’t know if it’d be the same if we weren’t on Music Row. We need to keep the little players here too. Five properties right in a row, they’ll sell them as a block. They’ll tear them down and build something big. I feel like I could go out of town for five or 10 years, and I wouldn’t recognize Music Row at all.”

Music Row was first established in the late 50’s as a music campus, and quickly became the epicenter of the country music industry, with labels, studios, booking agents, management companies, and publishers all locating to the two adjacent streets, making it possible for professionals to walk from office to office to conduct business. The close quarters and camaraderie of Music Row is what is given credit for country music’s longevity and strength, even if it’s at the expense of some of the music’s creativity due to the insular environment the Music Row campus is known for.

Now like much of Nashville, gentrification is threatening many of Music Row’s landmarks. Some buildings have already been saved, like the historic Studio ‘A’ and Studio ‘B,’ but other businesses like Bobby’s Idle Hour are not likely to last if the rabid gentrification continues.

However Music Row preservationists could have a new ally in helping to preserve landmarks in the coming months and years. The National Trust for Historic Preservation has announced they will begin giving guided walking tours of Music Row starting on June 20th. The tours will be conducted in partnership with Let’s Go Travelin’ Tours and Historic Tours of America’s Old Town Trolley Tours.

“Amid its unassuming former homes and small commercial buildings, visitors will discover that Music Row is truly a one-stop-shop for every aspect of the music industry,” says Carolyn Brackett, senior field officer for the National Trust for Historic Preservation. “Everything from recording studios, record labels, publishing houses and even housing are all found along the streets of this district, creating a musical ecosystem unlike anything that can be found anywhere else in the country.”

Appropriately, the tours will begin at Bobby’s Idle Hour. Visitors will have the option to ride a trolley to Bobby’s or travel to the district on their own. Then tour guides will lead the 90-minute walking tour while providing an in-depth orientation on the offices and recording studios along the route. Tours will be offered on Wednesdays and Saturdays at 10:00 a.m. and 1:00 p.m. starting on June 20. Summer evening tours are also offered on Mondays and Thursdays at 6:00 p.m. starting June 25.

“All of our guides have a passion for the music and history of Nashville, and some are even songwriters and musicians who came here to hone their craft and carve their place in the history of Music Row,” says Judy Johnson, the owner of Let’s Go Travelin’.

A portion of the ticket sales will go to benefit the Music Row Preservation Fund. But most importantly the tours will help educate the public about the historical significance of the area and some of its most important landmarks, instilling visitors with their own passion for preservation of Music Row’s important places.

For more information on the new guided tours, go to TrustedTours.com .