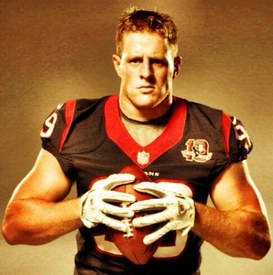 Training camps for the 2015 NFL season haven’t even commenced yet, and one of the NFL’s star defensive tackles has already recorded his first sack . . . that is unless you take a second look on instant replay and want to throw a flag for unsportsmanlike conduct.

Houston Texans defensive superstar J.J. Watt was in attendance for the Zac Brown Band portion of Summer Fest at the Marcus Amphitheater in Milwaukee on Sunday (6-28), and apparently decided to pull a little side duty in the security detail. Just as Zac Brown Band was finishing up what sounds to be a version of the Red Hot Chili Peppers’ “Under The Bridge,” a crazy ass fan wearing an Alabama football T-shirt jumps out of the crowd and starts dancing on the stage. Mere seconds later, J.J. Watt materializes and lays the crazed fan flat on his back in one swift football move.

Of note: J.J.’s Alma Mater is Wisconsin (remember, this happened in Milwaukee), and Wisconsin is scheduled to play Alabama for the first game of the college season. And that’s not the only piece of evidence that the event was probably staged. The way J.J. stands over the perpetrator and slowly puts on his shades, and how the actual security doesn’t seem to be in much of a hurry to clean up the mess, likely means the whole thing was choreographed for the local crowd.

Whether anyone farther than the first few rows could tell it was J.J. Watt serving the justice, or that Mr. Antsy Pants was proclaiming his love for Alabama football is doubtful, but it does make for an entertaining (and bruising) 30-second intersection of the music and sports worlds.

Nobody messes with @zacbrownband pic.twitter.com/bS3Rat13xP