“If you’re not on country radio, you don’t exist.”

Those were the now immortal words the former Sony Nashville CEO Gary Overton uttered in late February that caused reverberations and backlash throughout country music. Then about a month later it was announced Gary Overton was vacating his position at Sony. Seems strange to think all of that transpired a mere four months ago (Salad-gate has sort of supplanted the controversy), but as arguably the biggest label seat in Nashville, the absence of a leader left many artists and the plans for their music in limbo, and possibly nobody more than Garth Brooks.

There’s no better example of why Gary Overton’s radio comments were unfounded than the success Garth Brooks has experienced in the past year after coming out of retirement. The first two Garth Books singles from his Man Against Machine album positively bombed, but that didn’t get in the way of him earning $90 million dollars, good for #1 in country, and #6 overall on Forbes’ Highest Paid Celebrities list. Of course, Garth Brooks had a little bit of a legacy to ride on, and about 13 years of pent up spending power to take advantage of. We’ll see if those numbers can hold up for consecutive years.

But don’t think Garth is content with counting his concert money while his recorded music tanks. You can’t put all the blame for the Garth Brooks radio malaise on Gary Overton. “People Loving People” and “Mom” were terrible single selections, and seemed to have come from the heart of Garth Brooks instead of the head of a label. But the vacancy of Overton’s position put Garth and others in radio limbo while the new CEO was selected. 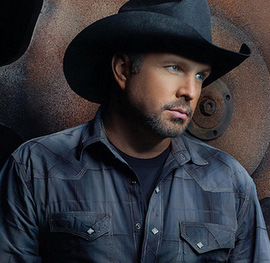 “Sometimes you’re a person in the boat, and you’re not steering the boat. And it’s scary,” Garth said right after Gary’s departure was announced. “So as an artist, when your label head is gone you wonder who’s gonna fill in and what’s gonna change … I’m not sure it’s as hard to get a deal, but I guarantee it’s a thousand times harder to hang on to it. Because everything is disposable.”

Garth later explained that any plans for a third single were on hold until a new CEO could be named. “My thing is allow them the freedom to make that transition and get a plan and nobody’s heard anything about that yet,” he said. And let’s not forget that when Garth announced he was coming out of retirement, launching a world tour and releasing a new album, he initially said it would be a double album, but later said he would release the second half on a subsequent date. The longer the Sony Nashville CEO seat remained vacated, the longer Garth was likely to have to keep the second album on the shelf. Garth also announced recently that he’s planning a Christmas album with Trisha Yearwood. Without a label head to work with, some serious kinks could have formed in the Garth Brooks itinerary.

But now it appears Sony Nashville has found their man. Randy Goodman, the former founder and president of the now shuttered label Lyric Street, will be the new CEO of Sony Nashville taking over for Gary Overton. Goodman was the understudy of former long-time Sony Nashville CEO Joe Galante who Gary Overton replaced. Where Gary Overton’s tenure was seen as one of a ship adrift, Joe Galante is given credit for keeping the company on sure footing.

“That place has been like a lost ship on the sea without a captain for too long,” Alan Jackson manager Nancy Russell told Billboard. “So it’s comforting to know that what Joe Galante built during his many years at RCA and then Sony will be in capable hands again. It’s great news for the Nashville community.”

So the next question is if Randy Goodman will take the same narrow perspective on country music Gary Overton did, or if he’ll use the position at Sony as one to be a leader at large in an industry that is severely lacking in the leadership department.