NOFX Says They’re Glad Country Fans, Not Punk Fans Got Massacred in Vegas, While In Vegas 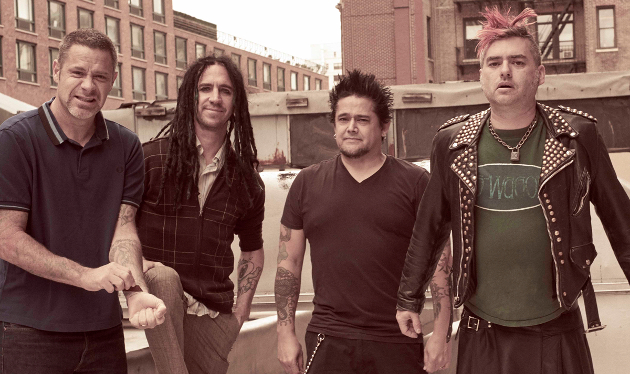 The punk band NOFX decided that the deadliest massacre in modern U.S. history would make for good joke fodder this weekend, and used country fans and artists as the punch line when they took the stage at the Punk Rock Bowling & Music Festival in Las Vegas, Nevada. Vegas was also the site of the Route 91 Harvest Festival massacre in October of 2017, when roughly 1,100 rounds of ammunition were spayed down upon the densely-packed crowd of the country festival, killing 58 people and injuring over 500 others.

“We played a song about Muslims and we didn’t get shot. Hooray,” front man and bass player Michael Burkett, known as Fat Mike said during the NOFX set Sunday night (5-27). This caused one of the other NOFX members to chime in, “I guess you only get shot in Vegas if you are in a country band.” Fat Mike then responded, “That sucked, but at least they were country fans and no punk rock fans.”

The comments (see below) have caused incredible backlash in Las Vegas and beyond from Route 91 survivors, their families, and others.

“I’ve been listening to punk since I was a kid,” said one commenter on social media named Haley Atkin. “Have always loved NOFX. Been to many of their shows. Traveled to CA for the Its not dead fest and was this closing to buying tickets and traveling to the punk in drublic fest in Ohio… But I am glad I didn’t. Why? Because I am also a Route 91 survivor. How dare you come to VEGAS and insult all those people that were there that night! And not even those people, but their family members and loved ones. What you fail to realize, is that Vegas may be a fun get away vacation for many of you, but this is home to so many. And even if people who were at Punk Rock Bowling weren’t there at the concert, if they were from Vegas GUARANTEE they were/are still somehow effected by it. Vegas may be big, but it’s a small town. I’m truly appalled and you guys lost a fan.”

Neither Fat Mike or NOFX has addressed the issue, but the Punk Rock Bowling and Music Festival has.

“In light of NOFX’s comments during their performance at the Punk Rock Bowling and Music Festival, we would like to offer a formal apology to those in attendance, the city of Las Vegas, the victims and the families of 10/1,” founders Mark and Shawn Stern said in a statement. “Las Vegas is home to the Punk Rock Bowling & Music Festival, and we do not condone the statements made from our stage on Sunday night. We take the safety of our festivalgoers seriously and want to relay that there is nothing funny about people being shot and murdered, ever.”

Fat Mike is know for his irreverent humor on stage, regularly using the moments between songs to make light of controversial subjects, and NOFX has also recorded numerous songs intending to offend, which is not unfamiliar territory for punk rock. In this politically-charged and hyper-sensitive media environment, sometimes words taken out-of-context or sarcasm misunderstood can stimulate overreactions. In fact certain punk bands like NOFX feed off of those reactions and the shock value of words to garner attention. Jokes are just that, and are often meant to walk to the edge of decency.

If you only know country music through Florida Georgia Line and Luke Bryan, then perhaps the fans of country music may come across as low hanging fruit. But not only was good human decency overlooked by Fat Mike and NOFX, so was the amount of cross pollination between country and punk fans and artists. The jokes weren’t just insensitive and unfunny, they were based off of a completely incorrect assumption.

For example, a site like Saving Country Music grew out of the underground country scene over 10 years ago where former punk fans and artists were finding their voices by returning to their roots in country, folk, and bluegrass music. Artists such as Hank Williams III, punk bands like ‘X’ and the Supersuckers, record labels such as Bloodshot and Sub Pop, they all helped to cross pollinate fans of punk and country starting in the 80’s to where there was mutual respect and collaboration between artists, fans, and entities of the two genres. The modern day DIY and independent roots movement sweeping across the country landscape is a kissing cousin to punk, employing many of its principles to the point where now the two are conjoined in irrevocable ways.

Just this week, Social Distortion announced a new tour where they’ll be taking Justin Townes Earle, Will Hoge, and other country artists out on the road with them—something Social D commonly does. Frontman Mike Ness has recorded his own country records, and directly helped the careers of country artists such as Lindi Ortega and others.

The point of Big Mike’s words were to shock and offend, and taking them too seriously is almost to give them more credence than they deserve. But in blood, humans are all the same—a Luke Bryan fan, or a NOFX fan. There’s a saying among hardcore music fans regardless of their stripes that all adhere to—in the pit, we’re all equal. Big Mike’s joke was stupid and insensitive to the victims of the Route 91 Harvest massacre. But it was also an insult to all music fans, and to music itself, which is one of the last few elements in a polarized culture where people of all stripes, tastes, and backgrounds can come together and enjoy something mutually, and together.

The beauty and harmony of music is very specifically what mass murderer Stephen Paddock looked to disrupt when he took his perch at the Mandalay Bay hotel and started killing innocent music fans. It’s that same harmony Fat Mike trounced upon Sunday night when he evoked the memory of the Las Vegas massacre to make a stupid joke.

Sunday, June 3rd: NOFX has issued a formal apology about the incident:

There’s no place here to backpedal. What NOFX said in Vegas was shameful. We crossed the line of civility. We can’t write songs about how people in this world need to be more decent, when we were clearly being indecent. Las Vegas has always been a welcoming city to our band, and to make light of the tragedy that occurred there was egregious.

All members of the band would like to sincerely apologize to anyone who experienced loss from the Vegas shooting 8 months ago, and to anyone who was at our show who lost a loved one or a friend, or who had to witness the incredibly senseless violence that night.

We were asked why we didn’t release an immediate apology. Well, we didn’t feel that we could write a sincere apology without reflecting on the actual damage we had done. No press agent was gonna write this for us. That’s why we have struggled with this for the past few days.

We didn’t plan or intend on saying anything so insensitive. It was off the cuff, but just as hurtful. We won’t blame it on drugs or alcohol or Ambien. That’s too easy. NOFX said it, and we own it. We made a tasteless joke. But to be clear, NOFX does not condone violence against ANY group of people, period!

As sincere as we’ve ever been,
NOFX