Trigger Down with Pop Country 21 Comments

As frequent readers of Saving Country Music will attest, over the years we’ve christened fun little nicknames for some our favorite pals of pop country. If you ever wondered where these names came from and why, here’s the explanation behind some of our favorite terms of antipathy. 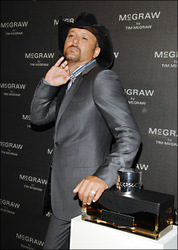 Tim McGraw and his plastic hat were the first to cross a big line with cross marketing in country music, beginning with his signature line of poof poof, and stretching all the way to Ken dolls (with a matching Barbie for his celeb wife Faith Hill) and now a new line of headphones of all things. Look out Dr. Dre! McGraw is unafraid to show his metrosexual side, and has blazed trails for both the marketing of a country music name, and the threshold of effiminacy the country music public is willing to put up with from their male stars. Yes, Tim McGraw: the trailblazer that gives a new meaning to toilet water, and the purveyor of country music’s version of yacht rock. 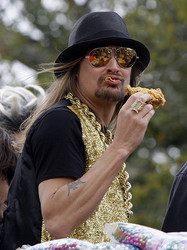 He’s the godfather of country rap who stole both Hank Jr. and Sheryl Crow’s dignity, and apparently is also responsible for convincing Arron Lewis of Staind to get into country music. We’d call him the king of trash, but he would take that as a term of endearment, so hopefully this nickname conveys the scuzzy, soiled fedora, eyelids at half-mast, twice-baked, incest-with-a-second-cousin-next-to-a-muddy-lake, greesy-haired burnout that Kid Rock is. Just like a wet cigarette, he is both tacky and disappointing. 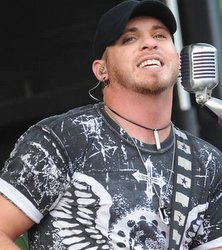 Affliction and Tap Out T-shirts, $180 designer jeans with manufactured rips and Gothic crosses embroidered on the ass pockets, offensive amounts of Axe body spray quaffed over glistening and exquisitely-tanned and waxed bare chests contoured by only the best metabolic steroids money can buy, this is the Brantley Gilbert target demographic. Pull your baseball cap down tight over your eyes, wear your shirt two sizes too small, act too cool to complete your sentences, and buy a penis pump under an assumed name and you too can be a country music douche just like Brantley Gilbert. He is the Nickelback of country music. 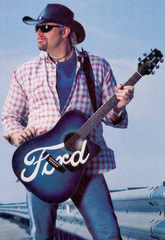 Oh how beautiful the irony is that the man with the big tough domestic truck endorsement plays guitars painted with the Ford logos and American flags that are in fact made in Korea. According to my buddy at the Seoul food restaurant down the street, “Takamine” is Korean for “big fat American sellout.” Who is the country star with the highest income in all the genre? Not Taylor Swift, not Lady Antebellum or Rascal Flatts. No, it’s Toby Keith, primarily from his Ford Truck endorsement. It’s a good thing those Ford Trucks have best-in-class payload to haul all that money to Toby Keith’s house, and the tons of pride and dignity they get from Toby in return. 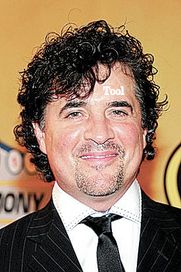 As the former DreamWorks executive turned founder and CEO of Big Machine Records (originally started with The Ford Truck Man Toby Keith), he’s the primary person responsible for the success of Taylor Swift and Justin Moore, the two most responsible parties for the erosion of the terms “country” and “Outlaw” respectively. Sure, country has always had pop in its ranks, but Taylor is where it became acceptable to use country terms and outlets for music that was pop and pop only, and opened the door for acts like Lady Antebellum and Lionel Richie. Same goes for Justin Moore and his Outlaws Like Me album (possibly the worst album ever) that jumped the shark for the “Outlaw” term.

Ironically, Borchetta and Big Machine are one of the few labels that actually extend a measure of creative freedom to their artists and have become one of the most successful label models on Music Row. But make no mistake, Scott Borchetta is where country music lost control of the purity of its terms.

Preying on the low self esteem and pandering to the least common denominator, Colt Ford has made a million dollars while admittedly having no skill, no talent, and not even taking himself or his music seriously. Appealing to like-minded souls who possess his same specific lack of skills and overweight body type, he peddles the most gratuitous version of filth to disenfranchised cultural frontrunners in America’s rural areas. No vertical stripes can save him, his morbidly-obese, pear-shaped body is proof that country rap is a cause of obesity.