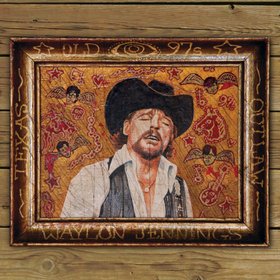 One hard and fast rule I have is that I review EP’s or splits only in very exceptional cases. Well a collaboration between country music Outlaw legend Waylon Jennings and alt-country pioneers the Old 97’s recorded some 17 years ago but only unearthed recently would certainly qualify as very exceptional.

Originally cut in Nashville in 1996 and sitting on the shelf ever since, Old 97’s & Waylon Jennings is a remarkable little gem unearthed these many years later, offering a window into a time right before Waylon’s health began to fail him, and right as the Old 97’s were rising in the alt-country tide alongside bands like Wilco and Whiskeytown. Along for the ride and to flesh out the collection released on October 1st are four Old 97’s demos also from 1996, giving you six tracks total. The two primary tracks involving the Old 97’s and Waylon Jennings were first sold to a very lucky few on limited edition vinyl as part of Record Store Day in April. But now they are available in digital and CD form to everyone through Omnivore Records.

The collaboration came about after the Old 97’s played a radio convention in Atlanta in ’96. Waylon was sitting in the front row and as the band recalls, Jennings perked up and started clapping when they delivered the line, “It takes a worried man to sing a worried song,” in their tune “Big Brown Eyes”—a call back to The Carter Family. Waylon later raved about the band to The Austin Chronicle and on the advice of their label, the Old 97’s reached out to Waylon to see if he wanted to collaborate. 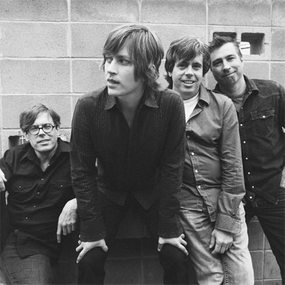 “He replied that he’d like to cut a couple of tracks in Nashville,” Rhett Miller recalled to Texas Monthly. “I think we were auditioning to do a full Waylon album where we’d be his band. After lunch, he cut the vocals for ‘The Other Shoe.’ He got to the second verse, where the cuckolded husband is under the bed and imagining the murders he’s about to commit. There’s a line, ‘You’ll try to find a doctor that will prescribe an elixir that’ll make everything better.’ He kept saying ‘excelsior.’ It got tense in the control room because he’d keep getting through the whole song and mess up that word. Eventually, I had an idea. I told him to just use the phrase “Annie licks her.” He started laughing. ‘I like you, you’re sick,’ he told me. And he nailed it on the next take.”

Where it could be easy to over-hype this collaboration and get swept up in simply hearing new music from Waylon, Old 97’s & Waylon Jennings truly does deliver. “Iron Road,” written by Old 97’s bassist Murry Hammond is a cool piece of music because it fits within the Old 97’s alt-country sound of the time, but with Waylon singing instead of Old 97’s front man Rhett Miller. At the same time, the piece fits Waylon perfectly, and he sings it with a confidence as if he had written it on his own.

With “The Other Shoe,” the shoe goes on the other foot, with the Old 97’s doing their best to reside within Waylon’s sound, and pulling it off with confidence and ease. Once again you’re struck by how strong and confident Waylon’s voice is singing the song written by Rhett Miller. In fact near the end, Waylon hits a high note in a register I haven’t heard him touch this side of the 60’s.

Next comes demo takes of 4 Old 97’s songs, the first of which is “Visiting Hours” that also appears in a more fleshed-out version on their latest album The Grand Theatre Vol.2. Whether you’re an Old 97’s stalwart or someone who needs a primer on what the band is all about, these tracks rise beyond their humble production by showcasing the blinding poetic proficiency the Old 97’s have evidenced throughout their 20 year existence.