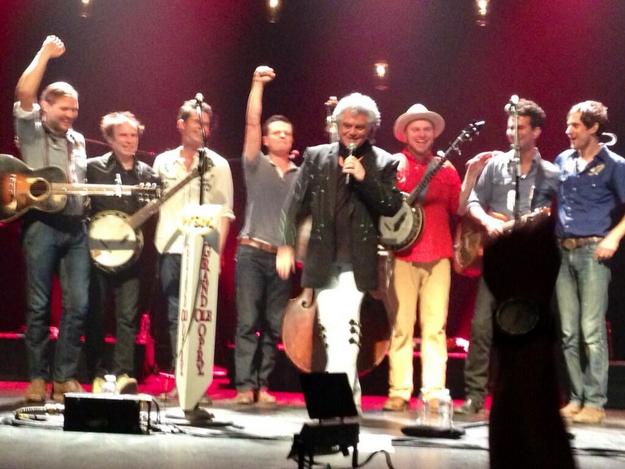 For the first time in the last half decade, the Grand Ole Opry is poised to induct a traditionally-leaning country music act into its distinct and coveted roster of permanent members. Opry member Marty Stuart surprised Old Crow Medicine Show at their show at the Ohio Theater in Cleveland tonight (8-16) with an invitation to join the storied institution during Old Crow’s scheduled performance. Their induction will take place September 17th.

Formed in 1998, Old Crow Medicine Show’s history is strongly tied to the Grand Ole Opry and some of its most important members. The band was discovered by Doc Watson’s daughter when busking on the same street Doc Watson used to play in Boone, NC. That led to them participating in the annual MerleFest music festival in the spring of 2000. At MerleFest, a woman from the Opry named Sally Wilson saw the band perform and invited them to participate in outdoor events in the Opry plaza throughout the summer. The band then found favor with Marty Stuart, who took them under his wing as a mentor. Old Crow Medicine Show made their Grand Ole Opry debut in January of 2001 at a Ryman Auditorium show.

In 2004 the band released their breakout album O.C.M.S produced by David Rawlings, and became one of the premiere string band acts in independent country music. With big songs like “Tell It To Me,” and the now gold-certified “Wagon Wheel,” Old Crow Medicine Show was one of the first string band acts to find fans outside of traditional country circles. “Wagon Wheel” has gone on to become a #1 hit for Darius Rucker, and Old Crow Medicine Show is often named as a precursor and major influence to bands like Mumford & Sons and The Lumineers that have brought massive commercial success to the string band concept.

The Opry’s Old Crow invitation ends a string of invitations and inductions of present-day country pop stars that have angered some traditionalist fans. Rascal Flatts, Keith Urban, and Darius Rucker were the Opry’s last three inductees. The last traditional country star to be inducted was Charlie Daniels in 2008. With this move, the Opry appears to be recognizing Old Crow’s influence, their recent success, and their ability to bridge differences in taste with their enthusiastic and creatively deft show.