Olds Sleeper’s “Before And After The Here And Now”

I don’t know how this guy does it. Like a quasar, he’s able to endlessly expel creative musical content unfettered from a seemingly inexhaustible source. It’s not always pretty, it’s not always perfect. But if you pay attention long enough and listen, you will invariably witness something that leaves you awe struck.

Olds Sleeper is the alias of a peculiar and virtually unknown songwriter that releases multiple albums ever year (sometimes under another pseudonym “Jellyspine Jekins”), usually for cheap or free, fumbled together in a home studio where he plays all the instruments and does all the recording and mastering himself. As humble as the presentation may be, he’s amassed a catalog of works that includes some of the best songwriting you can unearth in the vast population of basement musicians.

Before And After The Here And Now is a more mellow project compared to typical Olds albums (if there is such a thing). It’s not completely void of the manic, unhinged multi-layered guitar screamers that are one of Olds’ signatures, but it’s unusually light in that department. In past works, even when Olds would do his quiet acoustic numbers, the mood was still somewhat unsettled, like a psychopath who chooses to speak in whispers for the added fear it conveys. Here, the sweetness in Olds’ songs feels genuine. Before And After is warm, appreciative, and reflective. This is a singer/songwriter album, with a few tracks still showcasing Olds’ guilty pleasure of wanting to rock out and groove like an air guitarist that has graduated to the real thing. 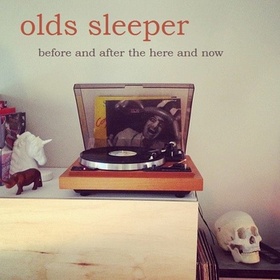 I can’t go any further without expounding on some of these songs, specifically “Time Will Bear Us Out” that you can go ahead and write down in ink as one to include on any Olds Sleeper “Best Of” album. Just as much poetry as music, some of the lines would make some of the most distinguished laureates raise an eyebrow with appreciative notice.

You tend to get so immersed in the artistry of Olds Sleeper’s music, it’s sometimes easy to overlook what a good musician he is. His guitar work and composition match the wit of the words in “Unpack Your Heart,” and the playful instrumental “Primitive” is another one of Before And After‘s preeminent tracks. Another good one is “Horses” where Olds welcomes in the extremely rare guest musician into one of his sessions–Scott Bookman on slide guitar. The somewhat X-rated “Darklight of Morning” has an unspoken sweetness to it, while in “Perfect Song” the sweetness is spelled right out.

Olds Sleeper’s 2012 album New Year’s Poem landed on Saving Country Music’s 2012 Album of the Year nominations, as did his song “Bigsky/Flatland” as a Song of the Year candidate. I would still say New Year’s Poem is Olds’ crowning album up to this point, and I’m not sure I want to get into the business of ranking his albums, but I would still consider Before And After The Here And Now one of Olds Sleeper’s best.

Before And After The Here And Now is available on Bandcamp (below), and CD’s are available and come with a free Jellyspine Jenkins download of the album These Roads.

Before And After The Here And Now, Olds Sleeper, Review