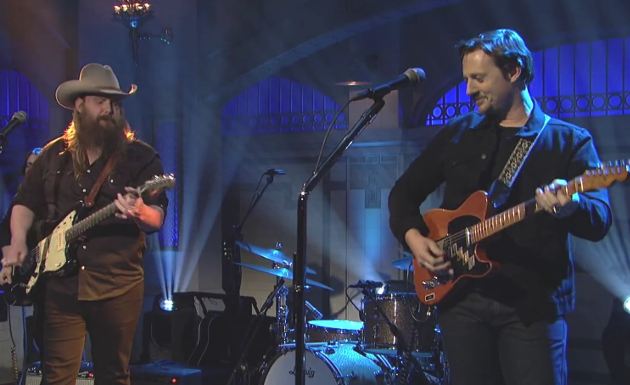 At 12:01 last night (or this morning), after all the hands had been shaken, and all the hugs exchanged on the Saturday Night Live set in New York’s Rockefeller Center, you didn’t know what to do with yourself. Okay, now you’re supposed to just nestle into bed and act like that didn’t just happen? You felt like you could take on the damn world, while a few short hours previous you were perfectly oblivious that Chris Stapleton and Sturgill Simpson were even planning to perform together. Now you had a musical feeling that you can only equate to when the few lucky bastards were able to see pairings of musical greats like this live back in the 70’s.

Chris Stapleton has now become the most polarizing man in country music, and it’s not even close. He’s more polarizing than Sam Hunt. To certain segments of traditional country fans, he’s more polarizing than Trump. And it’s all due to his success. The people who hate Stapleton—who are a smallish, but a vehement and vocal minority—will get a hearty laugh at all the hyperbole that has and will accompany the performance of Chris Stapleton on Saturday Night Live, January 27th, 2018. And the fact that the turncoat Sturgill Simpson was with him will make it even worse.

But the main reason Chris Stapleton has made for the imperfect country music superstar that certain traditional and independent fans can’t get behind is not because he’s not country enough. It’s not because he wrote songs for Luke Bryan and Thomas Rhett—which by the way, he didn’t. He wrote songs as a professional songwriter that ended up being cut by these guys. It’s not because he’s unwilling to speak out about the bad parts of the mainstream that he’s very much a part of—which is unfortunate. The primary problem with Chris Stapleton is that he’s been successful, which makes many with a eternal underdog spirit amid a culture of losing unable to identify with him.

The other problem is that Chris Stapleton has been suffering from a lack of passion.

There is a good chance Chris Stapleton hasn’t written a complete song in the last two years. His voice carries a tremendous amount of soul and vitality when he sings, but yet sometimes his performances feel a little flat. It’s too easy, too natural for him to sing, so he doesn’t have to try. Being on stage for Stapleton is a safe space, because he’s so good at it, and his wife is right there by his side. It’s effortless. And he’s a risk averse kind of guy to begin with. His From A Room records from 2017, they felt like they could have used more energy.

That’s why putting Sturgill Simpson on stage with Stapleton was such perfect chemistry. Sturgill Simpson is the risk taker. He’s the one that shook up country music by adding psychedelic influences to a traditional country record, by slamming his Telecaster down on that same Saturday Night Live stage, by staging a protest outside the 2017 CMA Awards. Sturgill is the trouble-minded “fuck it all” kind of guy that is exactly what Chris Stapleton needed to come out of his shell. And that’s exactly what happened Saturday night.

At the same time, Sturgill Simpson knew his place. If he had upstaged Stapleton, it would have not been a good look for either. This was still a Chris Stapleton performance, with Sturgill playing second fiddle. And as many of the electric guitar players out there likely noticed, Sturgill Simpson didn’t play in a Sturgill tone, he played in a Stapleton tone. He fit the songs, he learned and practiced the verses he sung to be respectful to the composition. And he did exactly what he needed to do.

“Midnight Train to Memphis” was a thing of beauty. And sure, if you’re a die hard country purist, there’s not much there for you to get excited about. Probably seeing some label such a performance “country” is a turn off. But this isn’t the Grand Ole Opry–with all respect to that hallowed stage. This is SNL, and you’re supposed to shake things up. You’re supposed to get loud, and appeal to the wide audience in a medium that stretches well beyond country, and especially traditional country. And that’s what Chris Stapleton did.

You could tell Stapleton was feeding off of Sturgill’s energy. Stapleton was being the Stapleton of the SteelDrivers and the Jompson Brothers, not the accidental multi-millionare from becoming the best selling country star for now two years running. It helped that “Midnight Train to Memphis” was originally a SteelDrivers song Stapleton wrote with Mike Henderson.

The second song “Hard Livin'” didn’t feel like it had the same vitality as the first, and the pauses in the composition felt a little awkward. But for some, this was the superior performance since it was more sedated and “in the pocket,” and the more country song co-written by Kendell Marvel, compared to the raucous “Midnight Train to Memphis.” Having Dave Cobb on hand for the performances also added to the exceptional nature of what you were witnessing.

The pairing of country music heroes used to be a much more common occurrence back in the 70’s. Willie Nelson and Waylon Jennings, Willie Nelson and Merle Haggard, George Jones and Tammy Wynette, Loretta Lynn and Conway Twitty—they didn’t just do a few passing songs together, they did entire album collections together in their eras. Now it takes years to get two guys like Sturgill Simpson and Chris Stapleton on stage for one performance. But we saw that the results can be magical. And it was perfect that it was a virtual surprise. With the type of negative and acrid mindsets we all suffer from in these modern times, there was not enough time to convince ourselves it would probably suck, or could not be as good as we anticipate, instead of just taking in the moment in the raw.

Let’s not get too ahead of ourselves comparing these performances to Willie and Waylon back in the day, or getting delusions of grandeur about a possible lineup of The Highwaymen 2.0 that may never happen. Time will be the ultimate judge and critic of these SNL performances, but for sure they had an impact much greater than Stapleton’s first trip to the SNL stage, which seemed to come and go with little fanfare, just like his mild collaboration with Justin Timberlake earlier this week (remember that? It feels like eons ago now). Instead, the 2nd Chris Stapleton SNL performance felt more like the impact seen when Sturgill Simpson performed SNL, which means we shouldn’t be surprised to see a sales surge for Staplaton’s already-impressive numbers shortly. The chatter behind these performances is astronomical.

But that won’t stop the critics of both men. And the accolades won’t stop here either. Chris Stapleton will be performing Sunday at the Grammy Awards with Emmylou Harris. He’s up for three awards, including Country Album of the Year. Jason Isbell, who felt almost missing on the stage last night, is up for Americana Album of the Year. Some wonder why we can’t stop talking about Stapleton, Isbell, and Sturgill — Stapleton, Isbell and Sturgill. It’s because they continue to do remarkable things. They continue to turn the country music industry on its head. And of course there are better, and more country artists out there, and women who also deserve some attention (though didn’t Morgane look gorgeous last night?). But paying attention to these three men means no disrespect to anyone else. They’re opening doors, they’re creating foundations for the Cody Jinks’s and Margo Price’s to benefit from in the future.

But we’re living in one of those moments in country music history you must take a moment to bask in. Put all the political bullshit aside. That was 2017. Yes, Chris Stapleton and Strugill Simpson are imperfect country music stars, and not even exactly country. But the same went for Willie and Waylon in their day—though not to make a direct comparison. Live in the musical moment. Take in these times with a sense of gratefulness. Choose to find the joy in these situations as opposed to the disappointment. Because they may be fleeting, and years from now, others will be watching these performances and will be jealous that you got to see them in their native times, experience it live, and will be able to hold on and cherish those memories forever.