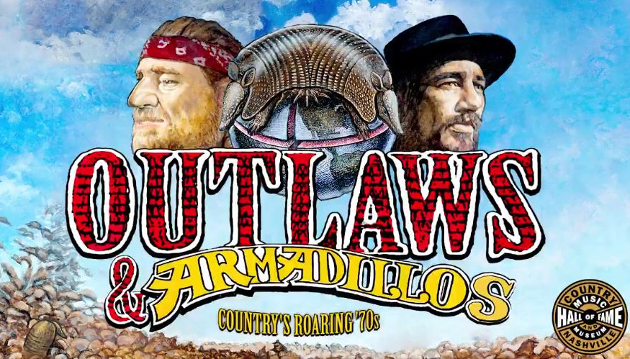 Announced in January, the next major exhibit to grace the Country Music Hall of Fame in Nashville will be called Outlaws & Armadillos: Country’s Roaring ’70s, and will focus on the Outlaw era of country, as well as the Texas connection to the music most indicative of the artists and bands that played at Austin’s Armadillo World Headquarters. The exhibit is set to open on May 25th, 2018, and last for the next few years with regular performances, panels, and other events to coincide with the exhibit.

To kick off the exhibit, the Hall of Fame has announced a concert on May 25th that will be directed by Dave Cobb and Shooter Jennings, and will feature performances by Bobby Bare, Jason Boland, Jessi Colter, Joe Ely, Jack Ingram, Jason Isbell, Jamey Johnson, Ashley Monroe, Michael Martin Murphey, Gary P. Nunn, Willis Alan Ramsey, Kimmie Rhodes, Billy Joe Shaver, Amanda Shires, Colter Wall and more. For those that can’t be in attendance, the presentation will be taped and later broadcast on SiriusXM’s Outlaw channel.

Also as part of the exhibit, the Country Music Hall of Fame has partnered with Sony Music’s Legacy Recordings to release a 36-song companion double album to coincide with what the public can expect to see and hear as part of Outlaws & Armadillos. We already knew the exhibit would do much more than scratch the surface of the whole Willie & Waylon phenomenon, but the track list of the album reveals just how deep it will go. The album will include songs from John Hartford, Townes Van Zandt, Doug Sahm, Chris Gantry, Terry Allen, Kinky Friedman, Commander Cody, Mickey Newbury, and even Stevie Ray Vaughan. You can see the full track list below.

The song collection will be available digitally and on CD on May 18th, and will include a 32-page booklet covering the era. A vinyl version is also being manufactured for release this summer.

With over 1 million attendees walking through the doors of the Country Music Hall of Fame annually, the opportunity the new Outlaws & Armadillos exhibit will present to shine a spotlight on many of country music’s unheralded greats from the Outlaw era and Austin is unprecedented.