Peewee Moore is “Making Sure The Story’s Being Told” 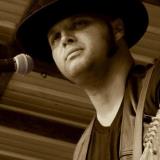 The last time I talked about Peewee Moore at length, he’d recently arrived in Austin, TX and was just getting his hands dirty in the country scene of the world’s “Live Music Capitol.” Now he’s a mainstay of Austin’s honky tonk music circuit along such names as Roger Wallace, The Carper Family, Jim Stringer, and the El Capitan Dale Watson. Any given night you might see Peewee haunting the stages of The Continental Club, Ginny’s Little Longhorn, and The Whitehorse Saloon with his permanently-haggard raccoon eyes, and his Tele riddled with battle wounds slung over his shoulder.

Peewee will never get too far away from his Chattanooga roots though with that unmistakable and thick northwest Georgia, southeast Tennessee accent. Just like fellow Chattanooga native son Husky Burnette, Peewee played lead guitar back in the day for the Choo Choo City’s country music patron saint, Roger Alan Wade. With Roger, and with his first band The Tennessee Rounders, Peewee cut his mold as a hard country, honky tonking Outlaw, way before that term would be so horrifically subverted by Music City pretty boy carpetbaggers looking to distract you from their slick, arena rock songs and silver spoon upbringings.

I initially had a little trouble getting into Making Sure The Story’s Being Told, I think because the first three songs came from such a similar vein: describing Peewee’s hardtack life as a traveling musician. Maybe I thought he was talking a little too much shop, but over time and taken individually, all three songs revealed themselves as worthy, especially the slow and plodding “Worn Out Old Guitar”, and specifically the line, “When you ain’t in the spotlight, you’re all stuck in a van.” Peewee Moore is the real deal, which means he’s not perfect. He’s like the personification of the American struggle, and that’s why he fits right into sensibilities of real music fans so well. 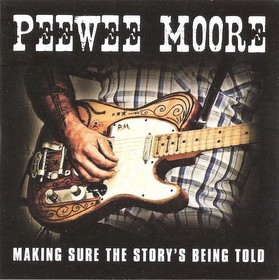 Further on the album revealed that it was brimming with variety. For my two cents, the best song on the album is the brilliant “Beneath The Cold, Cold Ground” where Peewee’s excellent guitar work sends your mind reeling around an infectious chord groove, while his vocals reach the sweet spot of his tone before distorting into a growl for emphasis. This is followed in order with the very fun and well-written foot stomper “Running Moonshine”.

“Samuel Colt & His Cartridge Gun” is probably the biggest surprise of the album, with its intelligent story craft brought to life with a tasteful trumpet part. “So They Call You An Outlaw” is not what you may think from the title. Instead of directly calling out fake Outlaws, Peewee gets crafty by conveying that “Outlaw” is not a term you can bestow on yourself, but must be given to you by others; and how that’s not necessarily a glamorous or fortuitous as some would have you believe.

These honky tonk albums are hard ones to make in 2012. Everyone else in country is trying to carve their niche, bending and blending genres and doing any manner of outlandish things to get folks to pay attention to them in a glutted music world. Meanwhile the charge of the honky tonk musician is to keep the traditions alive through purity. When it comes to artists like Peewee, I wonder if they wouldn’t be better off mixing in a few songs from other artists on their albums instead of writing all their own material; adding their best cuts of with the best cuts of others to bolster a project.

At the same time, what makes Peewee Moore distinct is that he plays his own leads and writes his own songs with a gutsy, lunch pail approach. Peewee Moore may never be big, but you can always count on him being Peewee. And for those not distracted by image or hype, that authenticity is what makes him special.

Making Sure The Story’s Being Told was released July 28th. It is only available at Peewee Moore shows at the moment, or by contacting Peewee at Peewee Moore at Yahoo dot com. Check back for online availability.