Performers Come Together to Pay Tribute to Charlie Robison

30 minutes before Texas music legend Charlie Robison was scheduled to be paid tribute by his fellow Texas and Red Dirt artists, a line 400 deep snaked around the block of the 200-capacity Key West Theater as part of the 2019 Mile 0 Fest. Some folks had shown up hours before, sipping mimosas and pitching lawn chairs out in front of the venue knowing demand would be high, and not wanting to miss this once-in-a-lifetime event.

On September, 24th, 2018, Charlie Robson announced that he would no longer be recording or performing music, either in the studio or on the stage after suffering complications from surgery that have left him unable to sing. “It’s been an amazing ride and I cannot tell you all what the last 25 years has meant to me,” Robison wrote at the time. “I was looking forward to another 25 but as they say ‘shit happens.’ “

Charlie was originally scheduled to play Mile 0 Fest, but was forced to cancel after the unfortunate medical prognosis. However the promoters of Mile 0 Fest immediately got an idea. “I’m a huge Charlie fan,” promoter Kyle Carter tells Saving Country Music, and he put a plan in action to hold a tribute.

11:00 a.m. is early for a festival, both for the fans, and the performers, many of whom spent the night before playing or listening to music in one of Key West, Florida’s numerous night spots. Some questioned why the tribute was held in such a small venue, but the intimacy of the theater was essential, and while songs were being performed by the multiple artists playing in groups of four, you could hear a pin drop in the venue.

Brother Bruce Robison, Jack Ingram who commonly played with Charlie during his career, Randy Rogers, Adam Hood, Jamie Lin Wilson, and Keith Gattis who wrote Charlie’s big hit “El Cerrito Place” all took turns playing tunes, and telling stories about the 54-year-old Charlie Robison, who was sitting out in the crowd, almost inconspicuous until people started to point him out in his customary denim clothes and in a troubadour cowboy hat.

“It’s hard to put into words what it’s like to have Charlie Robison as you big brother,” Bruce Robison said. “He’s been such a powerful personality forever, for the last 52 years for me. He was the football star, always dating the prettiest girls. He was always my hero.”

Bruce spoke about how it was his idea first to become a musician when the brothers moved from Bandera, TX to Austin, and older brother Charlie followed suit. Then when Bruce decided to pursue songwriting, so did Charlie. The friendly sibling rivalry that ensued for a quarter century soon had music fans calling the Robison brothers the First Family of Texas country.

Along with the legends of Texas music, multiple current and up-and-coming artists also participated in the tribute. “You know, he wears this all denim getup every single night,” Bri Bagwell explained. “So I thought I would be funny and I wore all denim when we opened for him, took a picture, and I said, ‘Charlie Robison stole my outfit.'” Bagwell went onto explain the social media storm that ensued due to rabid Charlie Robison fans telling Bree that Charlie’s been wearing denim on stage for decades, speaking to the loyalty of the Charlie Robison faithful.

The tribute was capped off when Jack Ingram came out, telling great stories about his days touring with Charlie, including when both were battling each other on the Texas and mainstream charts.

“We had a rule to never get our feelings hurt,” Jack Ingram said, but there was always a discussion of who would open the shows. Being asked to open one night, Jack Ingram tried to show Charlie Robison up. “I was a crazed monkey. I was all over the stage. I stood on the drummer’s kit, trying to burn the place down. And after the show, Charlie wasn’t pissed, but he was pissed. He said, ‘Why do you do that shit?’ I go, ‘Well man, ’cause I haven’t written ‘Loving County.’ “

Jack Ingram then played “Loving County,” with the capacity crowd singing along.

The tribute was unscripted, off-the-cuff, but completely heartfelt, and the once-in-a-lifetime opportunity for the people who attended, some of which waited hours for a seat. It ended with most all the performers coming back out to back up Jack Ingram singing the well-known Charlie Robison song, “My Hometown.”

The set list and performers can be found below. 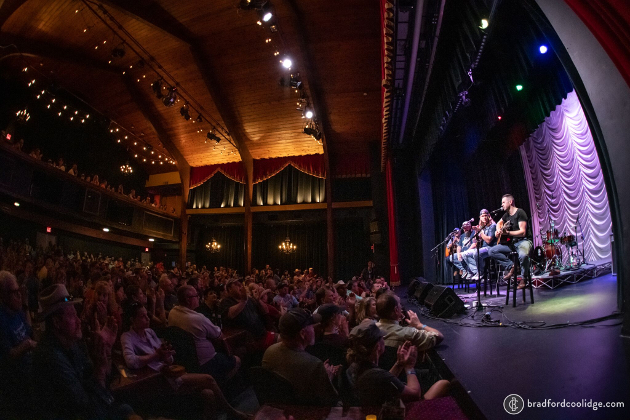