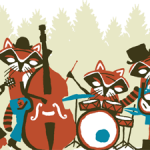 The Pickathon Festival, Aug 5-7 out in Portland, OR boasts of having “The best festival experience in the country.” And having been a participant of it in 2009, I can vouch personally for this bold statement.

But Pickathon and others don’t throw this statement out to create a rabid desire for tickets with the idea of shattering previous attendance numbers in a yearly cash grab. “Best” does not always mean “biggest” or “most attended” or “flashiest lineup”. For 13 years, as other Festivals that came into being about the same time chase superstar lineups and shattering attendance numbers, Pickathon is more about music sustainability. It is about low impact and community support. It is about developing new talent while supporting aging talent, and creating unique music experiences by not just showcasing a band on one stage, but in six unique performance spaces that create memorable experiences and give fans and artists unbelievable accessibility and interaction.

Pickathon doesn’t have headliners. That’s right. They may have names that you recognize and want to see, but the names you don’t know might be your favorite ones at the end of the Festival. In 2009, Pickathon was the first place I ever saw Justin Townes Earle, Hillstomp, The Hackensaw Boys, Caleb Kaluder, The Wiyos, Big Sandy & His Fly-Rite Boys, and many more, and cool collaborations like Caleb Klauder playing with Justin Townes Earle, or cool scenarios like songwriting sessions where I got to see Justin Townes Earle and Big Sandy perform, and then was able to ask them questions afterward in an open forum.

And many will read this and say, “Well Portland is just too far.” But Pickathon has been working on that as well. Just like SCM LIVE here on Saving Country Music, Pickathon is pioneering the ability to broadcast, and in high quality, entire concerts so fans from around the world can share in the experience. With their Benefest Series this Winter, they were able experiment with high quality concert streams online and do so by supporting local school foundations. Nothing can replace being there, but Pickathon is on the cutting edge of trying to figure out how to deliver the next best thing, and as always, in a sustainable manner.

Many more names will be added soon, but here’s the Pickathon 2011 Initial Lineup: