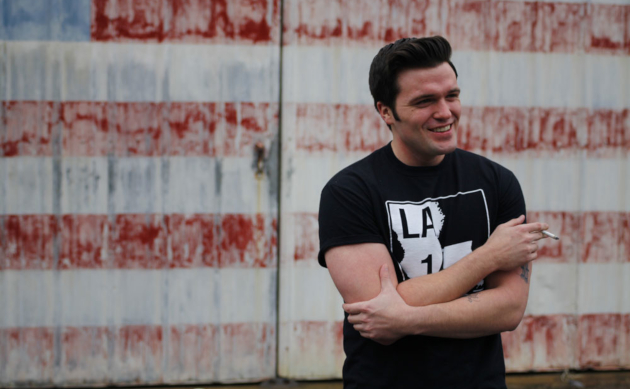 Rod Melancon and his band roll into the sweltering Washington D.C. summer afternoon over an hour late for soundcheck. Weekend traffic all the way from Philadelphia made sure of that. Welcome to the nation’s capital. Born and raised in the bayou country of Vermillion Parish, Louisiana, he should feel right at home in the punishing heat.

“The part of Louisiana I come from is definitely unique,” he says after settling into a shaded table at a crowded new city development called DC Wharf. Families and well-dressed urbanites with rescue dogs parade the breezy waterfront plaza to escape the heat. In case you didn’t know it, D.C. is a swamp too. No, that’s not a political statement; it was literally built on the marshy Potomac lowlands, filled in and paved over.

“Everything where I’m from is basically rice fields and crawfish ponds,” Melancon explains of the riverine landscape northwest of New Orleans where he grew up. “It’s a special place…it’s not like anywhere else.” It’s place that figures prominently on his new album Pinkville, Melancon’s third full length album, released this spring on Blue Elan records.

It’s a record rooted in the swagger of 80’s heartland rock, the honest truth outlaw country, and the restless troubadour spirit of the best Texas singer-songwriters. If his two previous albums, Parish Lines and Southern Gothic, were filled with insightful, personal, and well-crafted country and Americana songs, Pinkville inhabits a looser, tougher, sweatier sound that feels like it was as much crafted in a dingy garage as a recording studio. “On other records I’d say ‘We gotta gritty this up, it sounds too clean.’ I’d be in the vocal booth trying to get every lyric perfect. But on my favorite records that’s never the case.”

With Cajun blood from his father’s side coursing through his veins like the tepid waters of the twisting, serpentine bayous, a young Melacon was surrounded by the language and culture of bayou country. But he had to leave home to realize how truly special it was. “I didn’t like it that much growing up. I didn’t realize how unique it was until I left it.” At 18 he moved to Los Angeles to pursue acting. It didn’t quite work out. “I did a couple of horrible horror movies,” he says dismissively.

But songwriting took hold as a new way for Melancon to tell stories, and the young man who was once teased for talking like a “swamp rat” found a way to reinvent himself. “I lost my accent but ended up with a record deal. It’s funny because so much of the music I listen to I came to through movies. I was a real film buff growing up. Still am.” 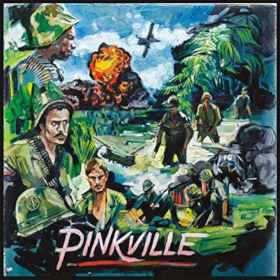 The Last Picture Show led to a dive into the work of Hank Williams. Terrence Mallick’s film Badlands naturally led to Springsteen’s Nebraska. One of his favorite directors mentioned Townes Van Zandt in an interview. “So of course, I asked, ‘who is this Townes guy?’ and then I listened to everything I could find. I found myself really drawn to songwriters who create a visual setting in their songs, the feel of a real place.”

He now calls Austin home, and feels again connected to the people and places of his upbringing. He doesn’t sing on Pinkville specifically about being Cajun, but the anxiety of a culture under threat—the language decline, the coastal erosion, the rising cost of living in an area battered by hurricanes and oil spills—courses underneath the songs.

On the title track, a true story about an old Vietnam vet forever pacing his front lawn in his old boots, we are introduced to the watery, fragile, and compromised place so many characters in Melancon’s songs find themselves in. It’s loping beat and baritone guitar dripping in reverb, it serves as an epigraph of sorts for the record.

On the sinister-sounding “Going Out West,” a gravelly-voiced drifter seeks to escape the limits of his situation through dodgy-sounding family connections. Like so many young men from Melancon’s home who seek adventure on the oil rigs of the Gulf or the escape of army, it comes with a cost. Here Melancon mimics Tom Waits’ original vocals, proving he can inhabit characters as a singer as well as an actor. But like any good method performer, almost all of Pinkville’s songs have elements from Rod’s own life, the area he calls home, or deep personal truths that he is unafraid to share.

On “Westgate,” with a Stones-esque riff borrowed via an early John Cougar sense of swagger, he sings of the chemical and coital pleasures to be found on the wrong side of the tracks. Drugs, a woman, a Trans-Am are the bait he goes after, only to find himself sweating it out in Afghanistan questioning his choices. But to Westgate he vows to return. In the track immediately following, the hazy voice of a man in treatment for addiction recalls the brutal fight against one’s worst self on “Rehabilitation.”

Melancon also celebrates the music that has inspired him. In “Corpus Christi Carwash” he retells the struggle of Freddy Fender, who despite late 50’s hits was rediscovered in the mid-1970s living in dire poverty. On “Heartbreakers” is the Tom Petty origin story told as a blues rave up. Rod began writing it even before the singer’s untimely death, and with whom shares an affinity. “He was a kid of the south who went to California to follow his dream. And he never forgot where he came from or tried to be someone he wasn’t.”

“Heartbreakers” ends with the triumphant chant of “…rock and roll will never die/Tom Petty will never die.” It’s a cathartic experience for every audience, with fists in the air and tears on faces commonly seen from the stage. A trippy, dark cover of Springsteen’s “57 Channels” in a way reflects Melancon’s own West Coast exile; feeling out of place in a land built for excess.

It’s Rod Melancon’s personal geography and family history—as opposed to the broadly unspecific set of shorthand clichés depicting “The South” that so much of country and Southern rock relies on—that make the songs truly strong, not merely just believable. Free of breakup songs or drankin’ songs or love songs to trucks, Pinkville may not fit in with what today’s country machine (or audience) may recognize as such. But like the work of the Drive-By Truckers or Kacey Musgraves or Jason Isbell, it is precisely the kind of record rural America needs to be hearing more, and making more.