The Pistol Annies and “Annie Up” 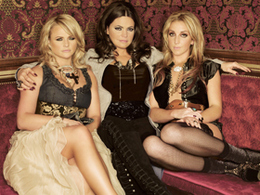 So here come the Pistol Annies again, with their cleavage heaving and lined with lace, all attitude in their tank boots and tube tops. So what’s the take? Are they traditional country saviors, or a silly act?

When you boil it down, the Pistol Annies are gender music. Sure, we all tend to be able to relate more to a singer and and a perspective that mirrors our own, but the Pistol Annies project seems to take it a step further. Either you’re a dude saying, “Yeah they’re hot and all, but I just don’t get it. My wife made me buy her the CD for her birthday.” Or you’re a chick, and you’re living vicariously through the Annies’ bawdy, tipsy adventures. Standard country songs that on the outside may seem to only appeal to women like “Your Good Girl’s Gonna Go Bad” or “You Ain’t Woman Enough (To Take My Man)” can still be easily transposed to the male perspective. Not so much for a song like Annie Up‘s “Being Pretty Ain’t Pretty.” Certainly there is exceptions with certain fans and certain songs, but for the most part, you can expect The Pistol Annies’ appeal to break across gender lines.

The Pistol Annies also inhabit a weird head space when it comes to one’s musical perspective. To mainstream country fans who tend to lean towards wanting more traditional sounds and an attention to songwriting in their music, they are a breath of fresh air. Lo and behold there’s actually some steel guitar on this album, and lyrical offerings that don’t make you feel stupid for listening. But an independent or traditional country fan’s ear is going to pick up on a polished sound, lyrical performances that are too perfect, slick and predictable arrangements, and still a somewhat formulaic approach to songwriting despite whatever depth.

But however slick this album may be, I still don’t hear a smash radio single from Annie Up, and Annie member Ashley Monroe has said herself this is not the aim of the album. However this may say just as much about the level of substance found on Annie Up as it does the dwindling importance of commercial radio. The album’s lead single “Hush Hush” has an engaging guitar hook and a rising chorus indicative of a successful radio song, but don’t expect it to depose Florida-Georgia line or the gaggle of recent country rap singles from the upper echelons of country’s charts anytime soon. 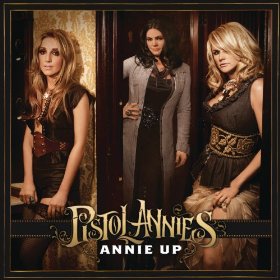 Songs like “Dear Sobriety” and the acoustic “I Hope You’re The End of My Story” are star character witnesses for the argument that the Pistol Annies deserve to be considered an act that is really elevating the state of mainstream country music in 2013. Let’s not gloss over that these ladies wrote all of these songs themselves. And Annie Up also offers a bit of a reprieve from the feeling that The Pistol Annies are simply a “bit”– an opinion one could glean from their first album Hell on Heels with songs like “Takin’ Pills” and the title track.

But the Pistol Annies remain a self-described affectation with their character pseudonyms and seductive dress. It is a solid secondary project behind each member’s solo career, and this truth could always constitute a ceiling for the Pistol Annies’ success and long-term influence. At the same time, the side project aspect of the whole thing takes the pressure off of the artists to deliver big revenue numbers, and allows them to just have fun in a manner that is infectious with their audience, however slanted it is towards the female.

This post-breakup “get yourself together girl” narrative that seems to have popped up a lot in mainstream female country songs lately comes up again a couple of times on this album, and makes one wonder when that thread might erode to clichÃ©. And though each Pistol Annie brings an excellent voice in both skill and tone, I just don’t feel the meshing of pitch that pulls the emotion out of a song like you would expect from two and three part harmonies from remarkable singers. There’s a few distinct exceptions, like the sparse “I Hope You’re The End of My Story.” Miranda Lambert’s singing specifically seems to really emphasize her Southern accent, possibly to bolster the Pistol Annie sass they hoped to embed in this project.

It’s not as much that the Pistol Annies are an enigma themselves, it’s that they can become an enigma depending on your perspective. Better than most of what you hear on country radio? Certainly. A band of real pith and weight when compared to entire body of roots music in 2013? Maybe not. But not anywhere near the bottom, and maybe helping to challenge what’s at the bottom by bringing an elevated perspective of what real songwriting is to the passive music listener. Or at least the female one.

Purchase Annie Up from Amazon

Listen to the Entire Album on Amazon