Pokey LaFarge Announces New Album “Something In The Water” 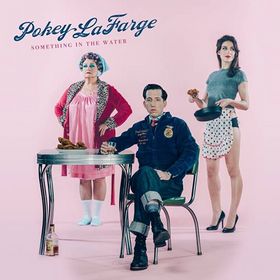 Country folky throwback Pokey LaFarge has announced the release of his latest album and his first with Rounder Records called Something In The Water scheduled to arrive in stores on April 7th. The old-school throwback St. Louis singing and strumming song man signed with Rounder in November of 2014 after releasing six albums since his self-released debut in 2006, and most recently recorded an album for Jack White’s Third Man Records in 2013. The new album is produced by Jimmy Sutton (JD McPherson), and includes a dozen songs recorded by Pokey’s backing band and other select players.

“The Midwest is at the heart of this record,” says Pokey about the album that is said to expand and deepen his musical reach. “The people playing on these songs are from Wisconsin and Illinois and Chicago and St. Louis, and there’s a certain attitude that comes across in the songs and the way that they’re performed. I’m born and raised in the Midwest, and my family’s been here for generations. This is where I’m from and how I think, and that’s reflected in the music I make.”

Songs on the new record include “the swaggering ragtime workout ‘Wanna Be Your Man’ the infectiously jazzy ‘Underground,’ the evocative crooner ‘Cairo, Illinois,’ the exotic ballad ‘Barcelona’ and the swinging album-closer ‘Knocking the Dust off the Rust Belt Tonight.'”

“Needless to say, it is a true honor to begin this new relationship with Rounder and be counted among so many champions of American music, past and present,” Pokey says about signing with Rounder. He will now will have released an album on the same labels as greats like Willie Nelson, Robert Plant, Ricky Skaggs, Del McCoury, Alison Krauss, and dozens more since its inception in 1970 as a predominantly roots label.

Something In The Water is currently available for Pre-Order, and you can download the title track for free now by CLICKING HERE.

JD McPherson, Jimmy Sutton, Pokey LaFarge, Something In The Water