If you don’t remember songwriter and performer Chris Porter from his time fronting the Bluebonnet Rattlesnakes or a bevy of other projects, perhaps you remember the tragedy that occurred a year ago this month when Porter and bass player Mitchell Vanderburg were both killed when their tour vehicle was struck from behind by a tractor trailer, pinning them underneath another truck. The accident happened on October 19th on Interstate 95 near Smithfield, North Carolina on their way to a show in Baltimore.

At the time of Chris Porter’s passing, he had just finished up recording a new album with the Bluebonnet Rattlesnakes called Don’t Go Baby It’s Gonna Get Weird Without You. With appearances and contributions from folks such as Will Johnson from Centro-matic and Monsters of Folk, former Drive-By Truckers bassist Shonna Tucker, Chris & Eleanor Masterson of The Mastersons and Steve Earle’s backing band, and John Calvin Abney known for working with John Moreland and Samantha Crain, it was hoped to be Chris Porter’s breakout record. Now it will be his swan song. 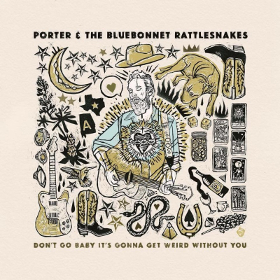 “I think Porter wanted things loose and wanted things to rock a little more on this record,” producer Will Johnson says. “He was ready to turn the guitars up a little more and let the band be the band. He’d experienced a great deal … he’d settled into Austin, toured relentlessly, had fallen in love again, and experienced the difficult loss of his dog just a couple months before the sessions. I can only guess he wanted this record to represent a clear-eyed document of the road traveled … and a look at whatever the road ahead might have held for him. There was a lot going on.”

“Porter survived a lot of heartache in his short life and I think you can tell on this album,” Porter’s fiance Andrea Juarez explains, who along with several of Porter’s closest musician friends was instrumental in making sure his final album would see release. “He was tired of touring, tired of hustling and not making it. He was tired of Austin turning into nothing but high-end condos and $7 dollar tacos. But he loved his music, and we loved each other. Our game plan was to get the album out, get married, buy a house in Nashville and split time in Austin.”

That plan never happened, but with the help of some friends, Don’t Go Baby It’s Gonna Get Weird Without You has, with a release date of October 20th via Cornelius Chapel Records, and a couple of release shows planned, including in Austin, Texas on October 21st, and another at Syndicate Lounge in Birmingham, Alabama on November 4th.

34-year-old Chris Porter had moved to Austin, TX from Alabama in 2012. He was well-respected and well-liked around the Austin music scene, and had fronted other bands such as the Some Dark Holler and The Back Row Baptists, along with Porter and the Pollies.

Ahead of the album, and new song has been released called “Shit Got Dark.” The album is also now available for pre-order.

Chris Porter, Don't Go Baby It's Gonna Get Weird Without You, Porter and the Bluebonnet Rattlesnakes