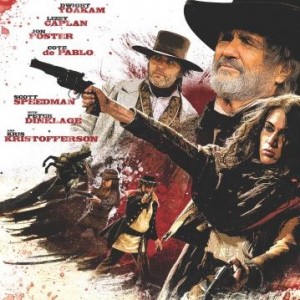 Last Rites of Ransom Pride, a movie written by Ray Wylie Hubbard, and starring Dwight Yoakam and Kris Kristofferson among others, is finally moving forward with distribution, with the LA Premier this Friday and Saturday and a slew of other dates following (see below for complete list).

And if you don’t see a town near you on the list, you can request the movie to come to your area at www.lastritesfilm.com.

““Lizzy Caplan plays a young woman who brings Ransom Pride (Scott Speedman) back to Glory, Texas, for a burial. Along the way, she is menaced by Yoakam’s murderous reverend, Kristofferson’s “savage outlaw,” and bounty hunters played by W. Earl Brown (Deadwood) and Jason Priestley. Peter Dinklage plays a shotgun-wielding dwarf who protects the woman alongside Ransom’s younger brother (played by Jon Foster of Door in the Floor.) Most of the action is meant to take place on the Texas-Mexican border.”

For more info and trailers on this movie, CLICK HERE.

I will be attending one, maybe more of the Dallas-area screenings, so expect a review soon.

Thanks to Twang Nation for tipping me off on this story.