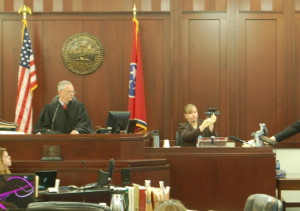 As a major winter storm bearing down on Nashville threatened to put a crimp in the court proceedings in the Wayne Mills murder trial, the court came into session just after 9:30 a.m. on Wednesday, and the prosecution to continued where they left off Tuesday by calling police officers and crime scene investigators to help re-create the scene for jurors and and explain the physical evidence in the case.

“It’s not going to snow,” Judge Steve Dozier said, in lieu of the 100% chance of snow in the forecast. It was his way to communicate to everyone that they needed to keep their attention on the case and not whatever may happen outside.

First on the witness stand was crime scene investigator Arthur Hipp, who was one of the first to observe that the crime scene extended to outside of the Pit and Barrel bar because of the blood left when Wayne Mills fell outside of the bar after being shot by Chris Ferrell, and then when Ferrell dragged Wayne Mills back into the bar.

Crime scene investigator Sharon Tilly was the next on the witness stand. She collected the majority of the evidence, including the two guns, the cigarette pieces that started the altercation, the broken glass shards from when Wayne Mills broke the drinking glass, Wayne’s cell phone, and the hat Wayne was wearing at the time of the shooting. Sharon Tilley also took some of the crime scene photos.

Wearing gloves, Sharon Tilley was asked to unseal important pieces of the evidence, including the .22 “Long Rifle” pistol with a scope, the .45 Taurus “Judge” revolver, and the hat Wayne Mills was wearing with a bullet hole near the top of the hat. Other pieces of the evidence, including reclaimed lumber wood where the other two bullets fired at Wayne Mills were also presented into court evidence.

One issue brought up numerous times by the defense was the presence of a green lighter located near the broken glass on the Pit & Barrel floor. As defense attorney David Raybin pointed out, the whereabouts of the lighter clearly seen in the crime scene photos is unknown, and there’s no paper trail to where it might be. Crime scene investigator Sharon Tilly seemed to believe it remains in the evidence room, but did not know for sure.

Crime scene investigator Rhonda Evans and police officer Ryan Matson were responsible for retrieving the additional bullet found by private investigator Larry Flair on November 27th. By law, Mr. Flair had to notify police as soon as the additional evidence was found for official retrieval.

At no point was it addressed if the newly-discovered bullet could have been fired after the initial investigation, but seeing how there was no debate about the amount of shots fired between the defense and prosecution, the bullet had yet to be found, and there seemed to be no motive for Mr. Ferrell to fire the additional bullet, the issue wasn’t addressed by either side.

The courtroom then adjourned for lunch, with the primary police detective to take the stand after the break.

NOTE: In the last update, two women were mentioned as being the other two on-scene witnesses to the shooting with musician T.J. Howard. The first woman’s name was Nadia Marcum. The second woman, who was also the woman Chris Ferrell talked to on the phone for four minutes after the shooting, is named Susan Branham.

Crime Scene Technician displaying the .22 “Long Rifle” pistol and scope, the .45 Taurus “Judge” revolver, and the hat Wayne Mills was wearing when he was shot. 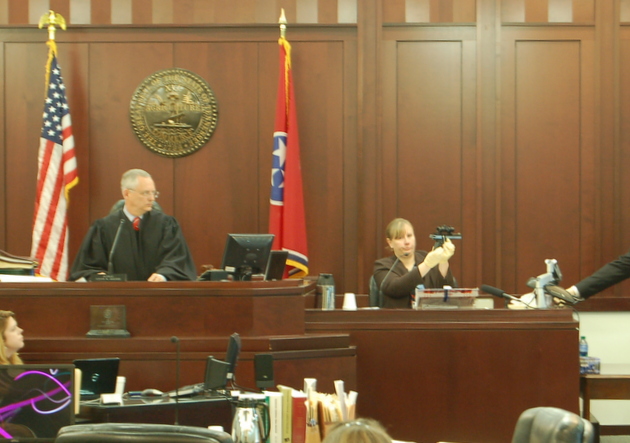 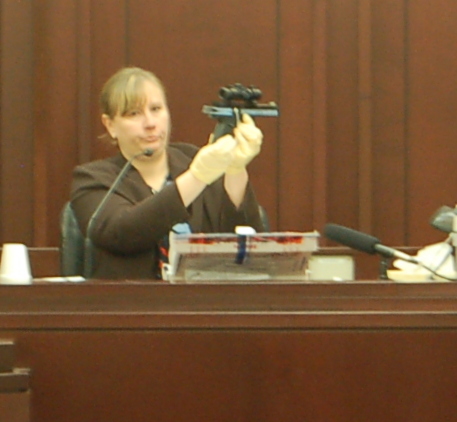 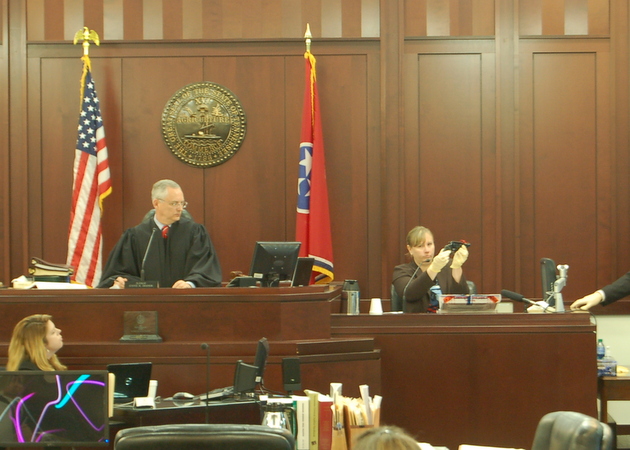 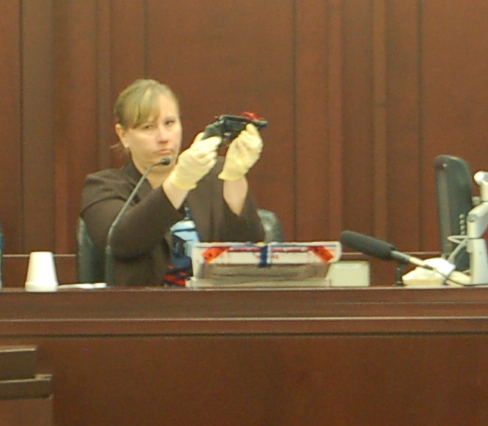 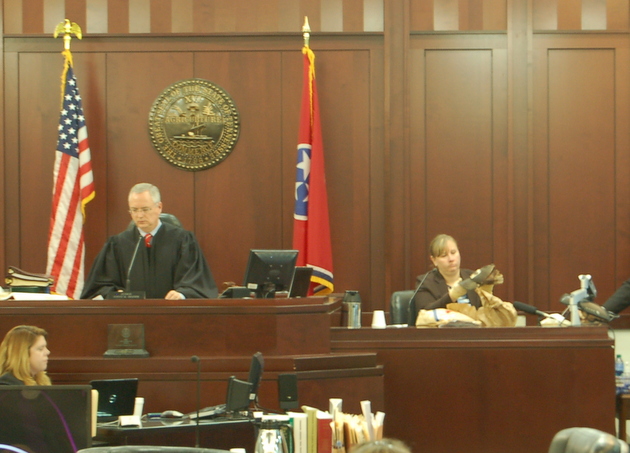