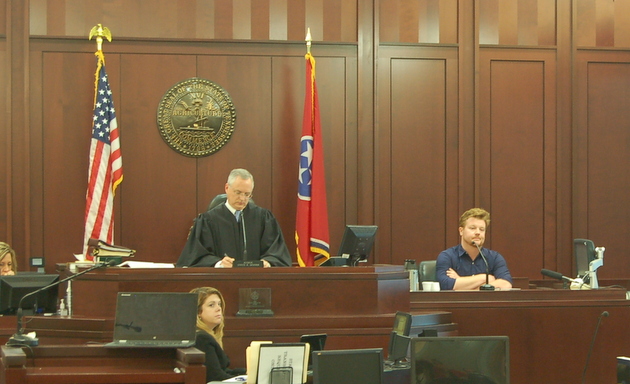 Musician T.J. Howard testifies for the prosecution during Tuesday’s court proceedings in the courtroom of Judge Steve Dozier.

To follow along with Saving Country Music’s coverage of the Wayne Mills murder trial, you can follow the numbered updates.

After oral arguments were heard by the prosecution and defense in the 2nd Degree Murder Trial for Chris Ferrell in the shooting death of Wayne Mills, the prosecution began to call its first witnesses in the case.

Though much had been made of Wayne Mills being a musician, Jamey Johnson and Shooter Jennings being linked to the case, and much was made about what might happen if Blake Shelton showed up in court in support of the Wayne Mills family, two other notable musicians also were involved in the after hours party at the Pit and Barrel bar where Wayne Mills was shot.

The first individual to take the stand was Nashville artist and Georgia native Eric Lee Beddingfield. Eric knew Wayne Mills for 12 years. “I loved him,” Beddingfield said, and explained how he was part of the Pit and Barrel gathering. He left before the altercation between Wayne Mills and Chris Ferrell began, but was able to corroborate other important facts leading up to the incident. Beddingfield also witnessed that Chris Ferrell had allowed Shooter Jennings to smoke in the bar earlier in the night, and thought it was exceptional because of how strict Chris Ferrell was known to be about smoking.

The second witness was musician T.J. Howard, who was at the Pit and Barrel bar with two females, Nadia Marcum and Susan Branham. Howard and the two females comprise the only on-premises witnesses to the shooting, though they were outside when the shooting itself occurred. They did however witness the incidents right before the shooting.

T.J. Howard confirmed that Wayne Mills had said to Chris Ferrell, “If you ever take a cigarette out of my hand again, I will kill you,” but he says he doesn’t remember if Wayne punctuated the would-be threat with the term “fucking” like the defense characterized in opening statements. T. J. also confirmed that Wayne Mills did smash a glass and that “it was pretty loud.”

As the situation became heated, T.J. Howard, Nadia Marcum, and Susan Branham left the bar and were approaching their vehicle when the three shots from Chris Ferrell’s .22 rang out, and they witnessed Wayne Mills stumble out of the bar. They left the parking lot, but continued to circle around as Chris Ferrell called Susan Branham on the phone and explained what had happened. This was the four-minute phone conversation referenced by the prosecution in opening statements that occurred before Chris Ferrell called police. Susan Branham advised Chris Ferrell to call 911, and after she hung up the phone, she called 911 herself. At the time, T.J. Howard said he was suffered from a panic attack—a condition he’s diagnosed with and is prescribed medication for. As Howard was describing the specific incidents surrounding the moments right after the shooting, he became visibly distraught on the witness stand.

Then many of the police officers and first responders who showed up after the 911 call took the stand. Officer Ashley Arnold, officer Carlos Augulo, and officer Shawn Rosson all testified about what they saw when they arrived at the scene. Officers said when they arrived, Chris Ferrell was outside and “hysterical.” Officers also observed Wayne Mills laying just inside the door of the Pit and Barrel on his back, with his feet facing the door, convulsing like he was having trouble breathing, and unresponsive. There were some towels under him. There was also apparently a large white dog running loose inside the bar. Police did not render aid to Mr. Mills, because their training required them to wait until paramedics arrived.

Paramedic William Alex Spencer took the stand and explained how the chain of events transpired after the 911 call was made. Even though the fire station was across the street from the Pit and Barrel, and personnel could have walked there “within 20 to 30 seconds,” because it was called in as a shooting, police were required to arrive first and secure the scene before paramedics could respond. Meanwhile the fire personnel heard the call come in, and a few of the fire personnel were watching out the station’s window.

When Mr. Spencer arrived on the scene he observed that Wayne’s pulse was weak and he was breathing erratically. They intubated Wayne and got his breathing back to normal, and gave him drugs to bring his heart rate back to normal as they rushed him to Vanderbilt hospital.

Officer Charles Cole was tasked with following the ambulance to Vanderbilt hospital and securing the personal possessions of Wayne Mills. As Wayne was being wheeled into the hospital on a gurney, a .22 shell casing was found on the gurney. Officer Cole secured the casing as evidence. He also secured other personal effects from Wayne, including a VIP pass to the George Jones tribute concert at the Bridgestone Arena earlier that night.

Then officer Ken Wolfe of the Crime Scene Investigation unit testified about some of the specifics of the crime scene. Officer Wolfe said he arrived at the scene at around 6:30 a.m, roughly 1 1/2 hours after the shooting. Initially investigators were working the scene under the permission of Chris Ferrell, but as time went on and there was more suspicion Ferrell was going to face charges, they decided to seek a warrant. Meanwhile Ferrell remained on the scene—something Officer Wolfe said he found distracting.

With defense attorney David Raybin, the jury was meticulously walked through the crime scene through photos. There were 12 separate pieces of evidence mapped out by crime scene investigators, including the two guns—the .22 Chris Ferrell shot Wayne Mills with and the .45 he initially claimed was wielded by Mills—cigarette remnants, and the broken glass smashed by Wayne Mills.

Wednesday morning is expected to proceed with further testimony from prosecution witnesses.