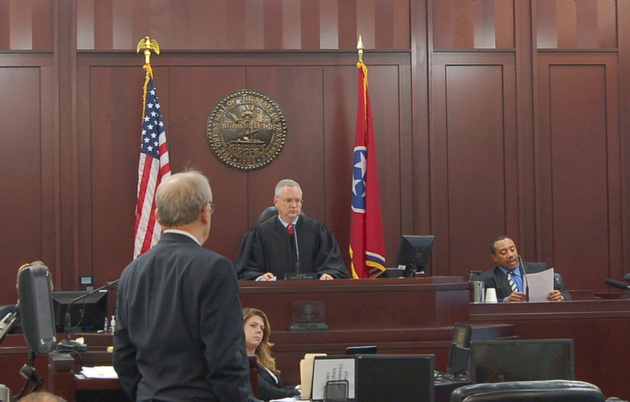 On Wednesday afternoon (3-4), the court of Judge Steve Dozier re-convened after a lunch recess to hear the testimony of lead detective Leonard Peck. Detective Peck testified that at the scene of the shooting, defendant Chris Ferrell told him Wayne Mills had displayed the .45 Taurus “Judge” revolver and threatened to kill him. He then explained that after Chris Ferrell voluntarily came to the Nashville Police Central Precinct to be interviewed, it became apparent Farrell was lying to him about the .45 handgun. Detective Peck then concluded the interview, read Chis Ferrell his Miranda rights, and suggested he speak to an attorney. Even though Ferrell had still not been charged in the shooting, by tampering with the crime scene, he was already susceptible to criminal charges.

Then the roughly 50-minute interview at the Nashville Police Central Precinct conducted by Detective Peck played on the court’s audio/video system. Chris Ferrell arrived at the police station around 9:15 a.m.—a little over three hours after the shooting. The video starts with Chris Ferrell and another police officer talking about the Pit and Barrel bar as a business, and the prospects of the bar in the location it was in. Then Detective Peck comes into the interview room, and Chris Ferrell starts reciting his account of the shooting.

As had already been established in opening statements from both the prosecution and defense, as well as parts of testimony from other witnesses called in the trial, Chris Ferrell initially lied to Detective Peck, telling him Wayne Mills pulled the .45 revolver found at the scene, forcing Ferrell to shoot Wayne in self-defense. “I don’t remember pulling the trigger, I don’t remember how many times I shot,” Ferrell tells Detective Peck in the video.

He also tells Detective Peck that he brought Mills back in inside because it was “freezing,” and that he “went around and got bar rags to try to stop the bleeding.”

Ferrell claims that he found the .45 handgun right by the door, unloaded it, and placed it on the table where police found it. When Detective Peck asks Ferrell if Wayne was facing him when he shot him, Ferrell never really answers the question except to say that Wayne was “turning” when the shooting occurred. “Is he okay?” Ferrell then asks, and Detective Peck tells Chris Ferrell that Wayne Mills is in critical condition.

Chris Ferrell testifies that he was not drunk that night, but had a couple of beers at the Full Moon Saloon earlier that night during the Shooter Jennings performance, and maybe one back at the Pit & Barrel. It’s then that Ferrell alludes that Wayne Mills may have intended to rob him—a story that came out before the trial that conflicted with the story about the altercation starting over a cigarette. “I can’t find my bank bag either,” Ferrell says in the interview with Detective Peck. Crime scene investigators also testified earlier that Ferrell had been looking for his bank bag. Eventually it was found in Ferrell’s vehicle.

In the interview, Detective Peck begins to grill Chris Ferrell about the gun. Peck says he believes that Wayne threatened to kill him, he believes that Wayne turned violent, but he doesn’t believe Wayne ever had possession of the gun. A conversation ensues about where the .45 was located, and how it would have been difficult for Wayne Mills to retrieve the gun from behind the bar. “I don’t think that gun had any involvement. Don’t sit here and lie to me,” says Detective Peck in the video. “If you told me the truth about everything else, I just want you to tell me the truth about the gun.”

Chris Ferrell continues to argue his case that Wayne brandished the .45 until at one point he completely breaks down emotionally, and becomes hysterical. “He pointed his phone at me! It was his phone!” Ferrell cries out. He begins sobbing, and after Detective Peck was able to get Chris Ferrell to admit that Wayne Mills was unarmed, he leaves the interview room to retrieve some tissues for Ferrell.

After Detective Peck leaves Chris Ferrell alone in the interview room, Chris cries out, “Wayne you stupid son-of-a-bitch, why did you do that? God Dammit!” Then he says, “God help me.” As this portion of the interview was playing in court, Chris Ferrell at the defense table was visibly crying.

After Detective Peck returned to the interview room, Ferrell admitted again to lying about Wayne Mills having the .45, but said about the other events, “It’s exactly how it unfolded, exactly the same” about the other details in the shooting. “I’m not denying any of this, but I was in fear.”

At one point, Detective Peck showed concern that Chris Ferrell was turning angry with him, but Chris retorted, “I like you. I’ve liked you ever since I met you.”

Then in the final moments of the interview, Detective Peck reads Chris Ferrell his Miranda rights, and Ferrell says he wants to speak to a lawyer before giving any official statements.

Defense attorney David Raybin pointed out numerous oversights and other issues by police detectives in the 2nd Degree Murder investigation during cross examination of of Detective Leonard Peck, including:

”Chris Ferrell was not aware he was being recorded in the Central Precinct interview room.

”None of the three primary witnesses, T.J. Howard, Nadia Marcum, or Susan Branham were tested for drugs or alcohol, given field sobriety tests or breathalyzers, or even asked about their level of sobriety before they gave statements to police.

”Chris Ferrell was not asked to participate in a toxicology test. Though the results may have been harmful to the defense, David Raybin has brought up this point numerous times to question the thoroughness of the investigation. “He consented to a search of the premises,” Mr. Raybin said.

”No GSR, or gun shot residue tests were done on Chris Ferrell to ascertain the hand he used to shoot the .22 pistol, or if he used both hands. According to the defense, this could be important information later in the re-creation of the shooting.

”No tests were done on Chris Ferrell’s clothing. He wasn’t asked to submit his clothing as evidence, even though the blood of Wayne Mills and other potential evidence was on the clothing. “I didn’t see the need for it,” Detective Peck responded.

”After accidentally putting “magnetic fingerprinting powder” of the cell phone of Wayne Mills, the phone was completely erased. Further, no requests were ever made to the phone company by investigators to retrieve the information that was on the phone. The investigators took the phone into custody, seeing the value of it as evidence, but didn’t retrieve any information from it. Defense attorney David Raybin alluded that it could have been something that happened on Wayne’s phone, maybe a disappointing or disturbing text message or call, that “set him off” on becoming so violent that night, and eventually threatening Chris Ferrell. The defense also pointed out that Ferrell’s cell phone records were a significant part of the evidence in the case, corroborating times of events and that Chris Ferrell had conducted a four-minute phone conversation before calling 911.

”Two of the three witnesses (T.J. Howard, Nadia Marcum, and Susan Branham) wrote their initial statements to police about what happened before and after the shooting while sitting in the same vehicle, potentially contaminating their testimony.

”Police missed the second bullet found in the wall of the Pit and Barrel bar. David Raybin asked Detective Peck if he’d ever worked a case where a private investigator found a piece of evidence after the initial investigation. Detective Peck answered, “No.”

”Investigators failed to determine of the large scope on the .22 handgun used to shoot Wayne Mills was on or off at the time of the shooting.

”Chris Ferrell had been up for more than 30 hours when he was interviewed by police.

The prosecution then brought a firearms expert to the stand to explain the ballistics of the investigation, and how it was conclusively determined that the .22 “Long Rifle” pistol was the murder weapon.

Finally the prosecution called Assistant Medical Examiner Erin Carney to testify. Carney confirmed that Wayne Mills had a blood alcohol level of .221—nearly three times the legal limit, and amounts of amphetamine in his system at “the low end of the therapeutic level.”

The medical examiner also explained that Wayne’s blood was taken at 5:25 a.m., roughly 30 minutes after the shooting. As the defense pointed out, this gave time for the alcohol in Wayne’s system to metabolize more than what it might have been at the time of the shooting. It was also revealed that Wayne Mills was “kept alive” even though he was officially brain dead on November 23rd so organ donation could occur.

After the testimony of the medical examiner, the defense rested at roughly 5:45 p.m.

Thursday’s court proceedings will be delayed until 10:30 a.m. because of winter weather in the Nashville area. When the trial resumes, the defense will begin to call their witnesses, primarily private detective Larry Flair, and Chris Ferrell.

Though their names have been presented in court as potential witnesses, so far neither Jamey Johnson nor Shooter Jennings have testified. Neither has Susan Branham—one of the on-scene witnesses, and the person Chris Ferrell spoke to for four minutes right after the shooting and before calling 911.