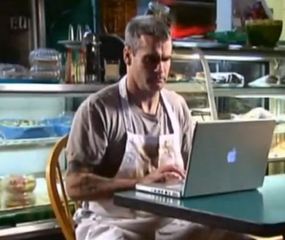 A video of punk rock frontman turned public speaker, comedian, and actor Henry Rollins penning a letter to Toby Keith has been making the rounds lately, likely stimulated by the political site aattp.org positing it on their human interest page a few days ago. The video features Henry undressing Toby Keith’s oafish approach to entertainment, and the damaging effects the message of his music could have on the psyche and behavior of his consumers.

The video nothing new though; it was uploaded to YouTube in late June, and actually originates from a 2006-2007 episode of The Henry Rollins Show on the Independent Film Channel, of which the “Letters From Henry” segment was a staple of. However it doesn’t make the letter any less poignant, or Henry’s approach any less intelligent, or the information any less topical, except for the specific song and album that Rollins references in the letter.

Keith actually responded to the open letter in 2009 when he told Country Weekly,

Well I happened to be [watching TV] one night and I come upon this show called The Henry Rollins Show on one of the small cable networks. I just happened to click on it to see what he was doing…and [he] critiques my song ‘Get Drunk and Be Somebody’ and in the middle of it this guy, who’s supposed to be a no-nonsense, stand-up kind of guy, goes, ‘Hey, I’m not asking for an ass-whipping here . . . ’ Talk about a hypocrite! I see those kinds of things on a daily basis. You just sit back and scratch your head. I will not come out of the box on somebody, especially that I don’t know, and critique their music. That’s not right and I won’t do it. We don’t bring a bunch of hate to the table.”

I must confess. I have never written to an icon such as yourself. I’m not trying to be funny. You are most certainly aware of your popularity, targeted as it is. Mainly for the blue of collar, and the red of neck. I can’t see NYU hipsters going out of their way to load your music into their iPods. I saw you interviewed on television a few months ago where you discussed the title of your recent album at the time, “White Trash With Money.” As I recall, you told the host that you overheard a conversation where you and your family were characterized as such. I’m sure these people are aware of their faux pas now, and I’m happy you were able to turn the insult into something positive.

I also recall you saying that a single off the album was called “Get Drunk and Be Somebody.” The title stuck with me so I looked up the lyrics. In the song you depict the life of the working man: nothing but a number, a cog in the machine who punches a time clock 5 days a week, and then finds himself through alcoholic salvation. I wonder if you tailor your lyrics to what you think your audience wants to hear, or if the lyrics really reflect how you think and feel.

Whatever the case may be, the sold out concerts and sheer tonnage of records you sold would testify to the fact that you connect solidly with millions of Americans. Please don’t take it the wrong way, but that fact troubles me. Now I’m sure you’re patriotic as all get out. I know you’re a USO member, and we all thank you for the time spends with our nation’s finest. But don’t you think that at some point your music loses its salve in the wound potency by merely pointing out the truth? And does it ever occur to you that perhaps you’re making a good living off the fact that a lot of people don’t? A little Nero-esque, don’t you think?

If it were me, I would want to be part of changing their situation rather than suggesting they just do their forty hours for the man, and then go get fucked up, and then providing the soundtrack for their beer soaked self-destruction. Do you ever consider your music defeatist? I’m not into censorship, and I’m not looking for one of those good time ass kickings you could no doubt hand me. But still, I wonder. Well, I’m sure you’ve got better things to do than read this elitist twaddle. I wish you and your family only the best. In the meantime, my hope is that you’ll stop convincing blue collar workers that the best thing they could do for themselves is buy a $40,000 pickup truck on a $30,000 salary.