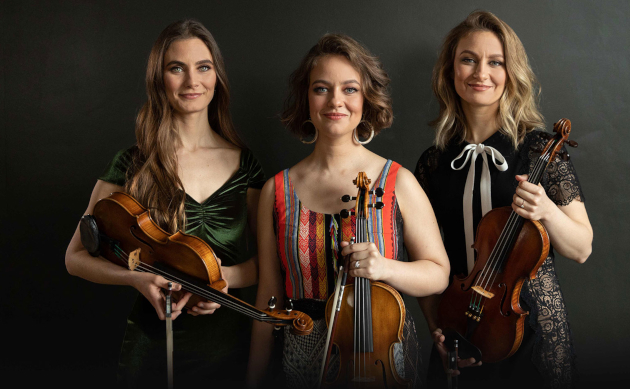 For over 15 years, the sister trio of Grace, Sophia, and Hulda Quebe have been doing their part and more to preserve the proud traditions of Western Swing music through an era where it seems like the discipline is more often forgotten than not. You can’t throw a rock without hitting a throwback bluegrass band or a festival to support them, but Western Swing has been sort of the forgotten art form of early country music, despite its opportunity to showcase musicianship, songwriting, and to send dancers twirling as good or better than any other style of country.

Now after being a conduit for many to see the timeless value in Western Swing, and performing many of the subgenre’s classics for appreciative fans, The Quebe Sisters are looking to do something a little different with their upcoming self-titled album due out September 20th.

“This album represents a new phase of our band and the start of a new direction for us,” the Quebe Sisters say. “In a lot of ways, the process of making this album felt like starting over; deconstructing what we knew about music and then trying to put it back together again. That’s the primary reason why we felt a self-titled album would be appropriate.”

Based in Dallas, TX, the trio have brought their three-part sisters harmonies and triple fiddles to appreciative fans all across North America, Europe, and even to Russia and other unique ports of call. But instead of just trying to just preserve Western Swing, they’re looking to move it forward with the new album.

“We differentiate our music as ‘Progressive Western Swing’ from simply ‘Western Swing’ because we aren’t trying to sound just like Bob Wills,” Grace Quebe explains. “Instead, we continue his vision, playing the style he pioneered in an authentic way by incorporating new genres and songs, interpreting them using our own unique voice through country instrumentation. To us, preserving the tradition of Western Swing isn’t about keeping something alive like a relic. Western Swing has always been about innovation.”

But don’t worry, The Quebe Sisters won’t be going all hip-hop or EDM on us with what will be their 4th album. A teaser video for the new record (see below) underscores that the classic sound and three part harmonies will still be the cornerstone of their music. But out of respect for the hard line Western Swing aficionados out there, they felt the need to be honest and up front about their intentions to not release a dyed-in-the-wool, straightforward Western Swing record, while at the same time answering some of the calls over the years for the sisters to strike out in a more original direction.

Whatever you want to call it, if The Quebe Sisters are involved, it’s likely to be classic, and quality.