Rachel Brooke “The Black Bird” Premier from “A Killer’s Dream”

The Queen of Underground Country, the lovely and talented Rachel Brooke will be releasing her new album A Killer’s Dream on December 4th, featuring Florida’s Viva Le Vox as her backing band, and a duet with Lonesome Wyatt of Those Poor Bastards. This will be her 3rd full-length album.

A Killer’s Dream was recorded at Rachel Brooke’s brother’s Halohorn Studio in Traverse City, MI, and will be made available in limited edition 100 red vinyl copies, black vinyl, CD, cassette, and digital form. All formats will be available for pre-order on Tuesday, November 20th at  http://rachelbrooke.bigcartel.com. “I am very excited about this record because I think it’s my best one yet, by a long shot. The sound we captured is something I’m very proud of, and I think there are some cool surprises on it.”

The first cool surprise is the world premier video for the song “The Black Bird” that you can watch below. Rachel will also be touring through the South and East in February and March as part of a Viva Le Vox / Joe Buck Yourself / Rachel Brooke super tour that will eventually take her to Europe and the European Muddy Roots Festival this summer. 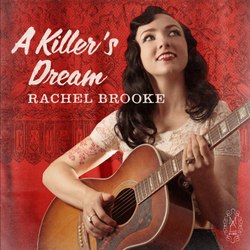