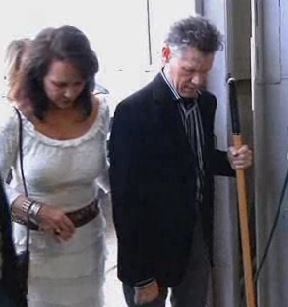 Ever since Randy Travis suffered a severe heart malady and subsequent stroke on July 7th of 2013, fans have been concerned about the condition of the country star, with little to no true information about his health condition or status, or his prognosis for recovery. Pictures have emerged of the ailing country star upon occasion as Randy still tries to recover from paralysis suffered during the stroke and emergency brain surgery he underwent to relieve pressure on his brain, but video that can help more clearly define how Randy has been doing has been absent.

Now we get to see the first video of Randy, who is seen walking with the aid of a cane and looking good as he attended an annual fundraising function in in Denison, TX for Four Rivers Outreach at a North Texas Regional Airport hangar. Though Randy looks healthy, he is still not speaking much, which is what he’s working most on according to his fiancee Mary Davis.

“Every day we go to speech therapy and physical therapy and occupational therapy,” says Mary Davis to ABC’s KTEN in Texoma who was was covering the function. “We’re learning words and phrases, learning to sing, of course, the music and the songs come easy for him, just the enunciation of words. But he’s working on it! He’s got the heart of a warrior and he doesn’t stop … He knows that the road ahead of us is is long and tedious, but he’s up for the challenge and he’s never never shied away from it. Never asked why me.”

The fundraiser crowd applauded when Travis walking into the hangar and was able sit down unassisted. Randy was released from impatient care in October of 2013.

Larry Gatlin was also at the fundraiser. “I have not seen randy since last year when we were here. I really feel bad about what has happened to him.” Randy performing at the Four River Outreach benefit helped the organization raise $169,000 last year. This year they hoped to crest $200,000, and though Travis couldn’t perform, his appearance after his health issues still made the night special. “Just being able to be here is a big improvement because he couldn’t even get out of the hospital and travel for a long time,” said Executive Director Arthur Horn.

See the complete report from KTEN below.

KTEN.com – No One Gets You Closer