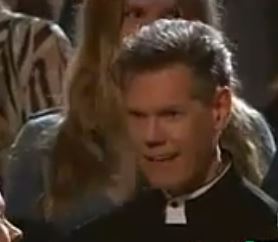 There’s very little that transpired at the 50th Annual ACM Awards Sunday night that could be salvaged as memorable. Terrible sound, production, performances, and presentation for the most part plagued the event from start to finish. The ACM’s eyes were bigger than their ears it turned out, and the idea of throwing an awards show in a stadium almost immediately revealed itself as unwise. Boomy sound, and bad camera angles that had just about everyone confused of where to turn throughout the broadcast made for messy moments. Despite spending a record amount on the production, the ACM’s forgot all the small things, and only a few decent television moments were peppered here and there between many bad ones.

But one especially memorable moment transpired when Lee Brice took the stage and started playing Randy Travis’ “Forever and Ever, Amen.” It was a traditionalist song released in 1987 that would help turn the tide of country, and set the stage for the “Class of ’89” to return country music to cultural prominence. Brice wrongly attributed the song to winning the 1985 ACM for Song of the Year (it was actually 1987), but the sentiment was still pure. And when Randy Travis himself emerged from the crowd, standing under his own power, and being acknowledged by a standing ovation, it was hard to not feel the emotion of the moment.

It’s not exactly the first time we’ve seen Randy since his significant health problems in the summer of 2013. On July 7th of that year, the singer was admitted to the hospital for viral cardiomyopathy (a weakening of the heart muscle), and then suffered a stroke as a complication to his treatment and had to receive emergency surgery to alleviate pressure on his brain. This left Randy with paralysis, and reportedly unable to speak, or sing. Despite many contrary reports, doctors say Randy’s personal issues including numerous run in’s with the law in alcohol-related incidents right before his health issues had nothing to do with his eventual condition or diagnosis.

Since being released from impatient care, pictures have emerged of Randy here and there, and even some video of the ailing country star in September of 2014. But the 50th Annual ACM Awards was the first time Randy Travis made a live, purposeful appearance on television. He looked happy, and healthy, despite still appearing to be hampered by the paralysis from his stroke.

A lack of specific information on Randy’s condition, and very little communication from the Randy Travis camp, had led to fairly rampant speculation and some misinformation about his condition trickling out in the press. Would Randy Travis ever sing again, or ever perform on a stage? Over the last two years, it’s clear the singer is showing strong resolve to battle back, and each new public appearance shows improvement in motor skills and continued warm smiles from the entertainer, even if his impaired speech continues to keep him from addressing fans publicly.

But even if Randy doesn’t sing a lick of music for the rest of his life, the legacy he’s left on country music remains indelible. And just to see him once again, strong and defiant, smiling and appreciative, conveys inspiration to all of us to persevere through tough times, take life day by day, and celebrate the victories over adversity we achieve.

Randy Travis left a letter on his website right after the appearance:

Hello, my friends. It was an amazing gift to feel all the love from you in Dallas at the Academy of Country Music Awards. It has been a hard-fought and miraculous journey since my stroke two years ago, and I have gained a greater understanding of God’s grace, and how quickly events can change us.

Words can never express my gratitude to those who continue to believe in me, pray for me and keep me lifted up in thought and deed. The kind cards and heartfelt letters of testimony and encouragement brought me through the darkest of days. Mary read each and every one of them to me, and I felt the love and concern being sent my way; and, I gathered strength from this. None of us are worthy of the immense outpouring of support shown to me, and I consider each of my fans, a friend. Thank you from the bottom of my heart.

The power of music remains a source of inspiration and healing for me. Writing songs was always a passion of mine, and I still have a lot to share with you. It is my prayer that, with continued healing, one day soon, I will be back on that stage exchanging music with my fans ”¦ my friends, who with God’s amazing grace, have brought me this far. As I work through music/speech/occupational/physical therapy, it is my hope that my songs of yesterday continue to touch your life in some way.

I wish you each good health, a kind word, a song in your heart, and a friend that has your back trough thick and thin.

My gratitude & love, “Forever and Ever, Amen”