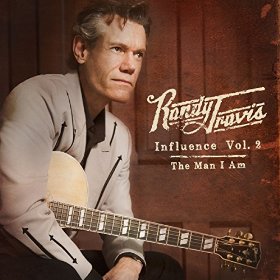 The health status of Randy Travis still remains very much in question, but that is not stopping the Randy Travis camp and Warner Bros. from releasing the second installment of his Influence: The Man I Am series on August 12th. The first album in the series was released on September 30th, 2013—a few months after Randy suffered a serious heart condition and subsequent stroke. Travis had to undergo brain surgery, and has been taking part in significant rehabilitation and physical therapy ever since the health episode.

Randy’s Influence series of releases looks to chronicle the classic country songs that went into the sound that may Randy Travis one of the most popular and influential country music artists of the late 80’s and into the 90’s and beyond. The new collection includes covers of Hank Snow’s “I’m Movin’ On”, Kris Kristofferson’s “Sunday Morning Coming Down”, Hank Williams’ “Mind Your Own Business”, and Waylon Jennings’ “Only Daddy That’ll Walk The Line”. It also includes the Randy Travis tribute to George Jones “Tonight I’m Playin’ Possum” written by Keith Gattis. Randy’s performance of the song at the 2013 CMA Fan Fest was one of his last public performances before his health issues (see below). Travis recorded both volumes in the Influence: The Man I Am series before last year’s health scare.

The extent of Randy’s paralysis after his stroke and surgery, and if he will ever sing again have been a topic of great speculation in the tabloid press, with multiple unnamed and named sources leaking conflicting information about Randy’s health status, while pictures of Randy appearing in public continue to surface. Last week yet another story citing an unnamed source surfaced in Closer Magazine, saying, “He hasn’t plateaued in his recovery, which is always a big fear. He really faces a long, tough battle.” The story also cites songwriter and Randy Travis friend Bonnie Paul who says, “He’s taking great strides and getting better. He’s a cowboy! If he gets back his strength, then anything is possible.”

Meanwhile any true health information about Randy’s status remains unclear, and his camp has yet to release any official statements about his prognosis or rate of recovery.

This Influence: The Man I Am series gives Randy Travis fans something new to listen to while Randy continues his hard-fought recovery to better health.

Pre-Order Influence Vol. 2: The Man I Am