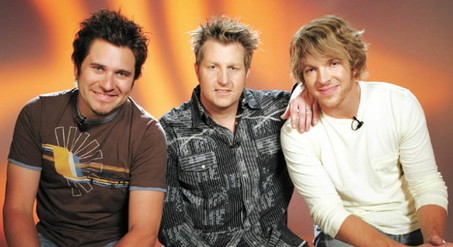 Superstar country music group Rascal Flatts has confirmed that they indeed lip synced their performance Sunday night on the 49th Annual Academy of Country Music awards. The Big Machine Records trio lit up twitter when they took the stage, with observers wondering why the performance looked so wonky and wondered if lip syncing was the answer. Saving Country Music has been waiting since the performance for clear video evidence of the lip sync, but today the band spilled the beans and ended all suspicion by releasing a statement through Twitter.

After having performed several shows earlier in the week, Gary [LeVox] lost his voice. So, instead of cancelling our commitment to do the show, we made a last minute decision to lip-sync. We’ve never done it before, and we’re obviously not very good at it. We look forward to singling live again in the very near future!

Though lip syncing has always been suspected from many country music artists in multiple award show performances, this is the first one that has been openly admitted to on record. Apparently the group felt since it was so obvious, it was better to open up about the issue instead of continuing to perpetuate the lie to their fans. Ironically, the ACM presentation opened up with hosts Blake Shelton and Luke Bryan making a joke about Brittney Spears lip syncing, and how people would only see live music on the show. However backing tracks and other non-live sounds have also been used at country award shows, including in 1994 when Alan Jackson told his drummer to play with no sticks to tip off his fans the rhythm section wasn’t live.

Rascal Flatts is just the latest to get swept up in a lip sync controversy. In January, the Red Hot Chili Peppers admitted to not playing live during their Super Bowl performance.