Rascal Flatts To Be Inducted Into The Grand Ole Opry

Pop country group Rascal Flatts, the top-selling country group of the last decade, best known for their pallid and catchy tunes, prickly hair, and overt use of the pitch-correcting program Auto-tune in both the recorded and live formats, is now a member of the most sacred of all country music institutions, The Grand Ole Opry. 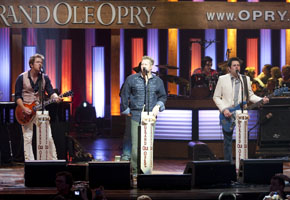 The announcement came as a surprise to the group, and the Opry crowd at tonight’s (9-27-11) Opry performance, where Rascal Flatts was scheduled to perform along with Larry Gatlin, The Charlie Daniels Band, and others. During the middle of Rascal Flatts performance, Vince Gill, 20-year Opry member and default MC for all things mainstream country music, interrupted the group and made the announcement, looking stunning in a set of dark-rimmed designer glasses. According to Vince, the “official” announcement, or induction will happen on October 8th, when The Opry is having their 86th Birthday Concert. Reportedly, singer Gary LeVox, bassist Jay DeMarcus and guitarist Joe Don Rooney cried like babies after the announcement, while the crowd of tourists gave then a standing ovation.

Hey, this is Saving Country Music, did you expect me to deliver this news without snarky quips?

Afterwards, Rascal Flatts gave thanks to their hair designers, Antares Audio Technologies for creating Auto-Tune, the 14-year-old girls that make up the majority of their fan base, and the infant version of Jesus.

Membership into the Grand Ole Opry is seen as one of the highest accolades in all of country music, from country music’s oldest institution. Some country pop and crossover stars have been Opry members before, and performed on the Opry stage. But never before has an act that is so overtly commercial, or so lacking in creative aptitude been inducted. And the worst part is, the majority of Rascal Flatts’ fans won’t even care that they are members, because The Opry institution means little to nothing to them.

This is a dark moment in the history of country music.

Video of the announcement: