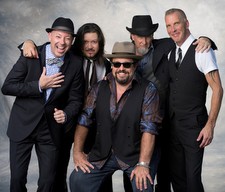 One of the things that has made live music increasingly frustrating over the last few years is this insistence to put a huge safety space between the stage and the crowd. Big stages in open spaces already unnecessarily dilute the vibe of music, but mandating five to ten feet of space between where the stage ends and the crowd begins is just uncool. I’m sure there’s insurance protocols and other such things in play here, and of course you need an area for stage hands and photographers to work in, but it is quickly getting out of hand.

Even more frustrating as a roots music fan is how they use the same cattle stockades to hold the crowd back no matter if it’s some eepish roots band playing, or Guttermouth. I mean, is stage crashing really an issue at a Milk Carton Kids show? Do The Cactus Blossoms regularly incite crowd violence? Hell most metal shows these days cater to a more docile crowd. It’s the Florida Georgia Line concert where you have to worry about some lug kicking your ass because his girlfriend vomited on you.

In San Francisco this weekend, the massive Hardly Strictly Bluegrass festival is going on, and The Mavericks took to the Banjo Stage on Friday afternoon for their set. For whatever reason, the security decided to be extra vigilant, and wasn’t allowing folks to dance some ten feet in front of the already apportioned-off area in front of the stage. But frontman Raul Malo was having none of it and actively told the crowd to civilly disobey the intrusive security staff while telling the security staff to back off.

Moment yesterday when @raulmalo01 of @MavericksMusic got aggressive security to back off & the party started pic.twitter.com/9I6ROiPMND