1975 was a marquee year in country music in many ways. As Music Row was in the throes of The Nashville Sound–marked by slick production, strings, and choruses to attempt to appeal to a more mature, cosmopolitan demographic–the scene in Austin was becoming influential on a national scale, with artists like Jerry Jeff Walker, Michael Martin Murphey, BW Stevenson, and eventually Willie Nelson putting out marquee albums. But one artist, and one album in many ways served as a nexus between the two competing ideals, that being Ray Wylie Hubbard, and the album Ray Wylie Hubbard & The Cowboy Twinkies.

Hubbard was as important as anybody in the formation of the Austin music scene, but he was unfortunate enough to record his marquee release in Nashville. In a classic story involving Music Row, once MCA was done adding their over-produced elements to Ray Wylie Hubbard & The Cowboy Twinkies, Ray and The Twinkies wanted nothing to do with it. The disappointment with the release is what sent Ray into a gray period in his career where he came to be known by some as “The Forgotten Outlaw”. Eventually Ray turned his life and his career around after being coaxed into becoming clean and sober by another famous Austin musician, Stevie Ray Vaughn.

Cowboy Twinkies has been out-of-print for years, but now a small label called Wounded Bird Records is re-issuing it in July. After reading Ray’s negative comments about the re-issue on That Nashville Sound, I decided to talk to him and get the full story.

Ray Wylie Hubbard: I really don’t have anything to do with them re-releasing it. It wasn’t an album I could get really excited about at that time. We’d made an album in Austin, TX, the Cowboy Twinkies, Terry “Buffalo” Ware, Clovis Roblaine, and Jim Herbst. And that was what was getting us all these record offers. It was a folk rock album, acoustic-driven, accordions and mandolins, BW Stevenson was a guest on it. We actually got a record offer from Atlantic, talked to Jerry Wexler, we talked to Discreet, which was Frank Zappa’s label. And they really liked it. But not really being aware of what was going on, we went with MCA. We made the mistake of going with Michael Brovsky, the guy who had produced Jerry Jeff’s [Walkers] album.

So we took the band to Nashville and recorded the same songs, but they said “country radio won’t play this because it’s a folk rock album”. So they put Jett & The Jewels, which was this girl background group on all the songs. And it just wasn’t rootsy or cool anymore. So when it came out we told people we weren’t happy about it, that it wasn’t the record that we made. It broke our hearts. I called my attorney and asked him “What should I do?” and he said, “I suggest you start drinking.” So I did. 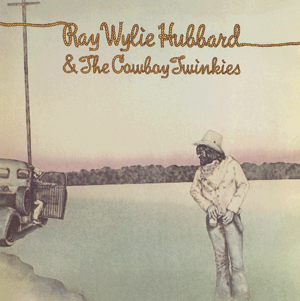 The songs were there, but it was recorded kind of “Nashville slick”. So when we heard they were re-releasing it, they hadn’t really talked to us. Of course I guess they don’t need our approval. So I just needed people to know. They’re kind of pretending like it’s some sort of landmark album and that people really want that record, and there’s no reason to want that record at all. It was a mistake, a wreckage of the past. I just couldn’t let people think that it was something that I approve of.

Triggerman: So your lawyer told you to start drinking, what happened as the ramification of the release of Cowboy Twinkies?

Ray Wylie Hubbard: When we heard the record, we were so heartbroken, so disappointed, we couldn’t get out to support the record. It wasn’t our record, it was the record that they did. So I waited out that contract, and then I did a record with Willie Nelson on his Lone Star record label. He was with CBS or Columbia, and Polygram or Polydor was courting him. So they gave Willie Lone Star Records, and he put all his friends on there. But when Willie didn’t sign with Polygram and stayed with Columbia, of course they didn’t have any need for Willie’s friends. So then I borrowed some money from a drug dealer in Kansas and did an album with Bugs Henderson, something quick, I think we made like 500 of them. I never could get into the business. Then Stevie Ray (Vaughn) came along when I was 41, and I got clean and sober and started recording, and my first real record was Loco Gringos (1994), that was the first one I could hand it to somebody and look them in the eye and say, “Here it is”. All the other ones I have to hand to people with excuses.

Triggerman: So the time between 1975, and when you got sober with Stevie Ray Vaughn, those 12 years, was that kind of a lost period?

Ray Wylie Hubbard: Yeah, those years we were just kind of a working band, a working bar band trying to do these projects ourselves. That 12 year period, I was doing stuff, but nobody knew about it.

Triggerman: How did you meet Stevie Ray Vaughn, how did all of that go down?

Ray Wylie Hubbard: Well I’d known Stevie. I went to high school in Dallas, Adamson High School and Stevie went to Kimball, and we’d known each other in high school just really briefly. And he was down here (Austin) and we just kind of run across each other. And then somewhere in there, through a friend, I’d heard that he’d gotten sober and had about 14 months. You know after my dad died, that last year and a half I was really bad. And so through a friend I met Stevie and they came and sat down and just talked to me about it because I was just going off the deep end. Stevie told me what it was like, what had happened to him, and that gave me a little hope that I didn’t have to live like that. So I turned my life around, and got serious about my songwriting and my music.

Triggerman: What was the name of the original album you recorded in Austin with the Cowboy Twinkies?

Triggerman: Did you ever release that? Is it just masters sitting somewhere?

Ray Wylie Hubbard: It’s kind of lost by the wayside. We have some, and we’re trying to put them together to where it’s a free download where you can go get those original songs from that time. Those originals I really like.