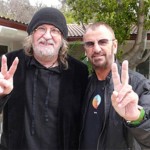 When you’re compiling your list of most-anticipated albums for 2012, you’ve got another one to add to the top of the heap. Ray Wylie Hubbard has announced he’s got a new one ready for 2012 called Grifter’s Hymnal, and he’s got an interesting cast of characters helping him, including Ringo Starr, long-time drummer Rick Richards, George Reiff, and his son Lucas Hubbard.

Here is what I have been up to in case you were wondering. I am am in the middle of mixing the new record with george reiff. The musicians who played on the record are Rick Richards, George Reiff, Audley Freed, Billy Cassis, Lucas Hubbard, Ian Mclagann, Ringo Starr and Brad Rice. Javi Garcia is doing his voodoo magic on the album artwork. We’re gonna call it “The Grifter’s Hymnal”, got a ring to it, huh?

Hubbard’s “Grit, Groove, Tone & Taste” mantra to making albums, along with his cunning use of lyrics, has made him known in certain circles as “Wylie Lama,” an originator of style from which other artists can learn from. This makes his albums a template for musicians, and  a treasure trove for fans. His 2010 release A. Enlightenment B. Endarkenment (Hint: There is no “C”) was a Saving Country Music 2010 Album of the Year candidate. When I spoke to Ray a few months ago, he talked about how excited he was about this album, and the unique place he decided to record it.

At Festival Hill in Round Top, TX, they have a musical conservatory there. It’s an amazing place. They have a thing called the Edith Bates Old Chapel. It’s an old Methodist Church I think built in 1830 in LaGrange, and they moved it to this facility and it’s just incredible. The sound is just incredible. I’m really excited about it.

No word yet on a release date. Stay tuned.