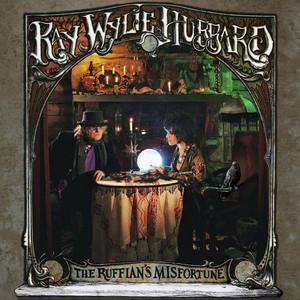 The Forgotten Outlaw, and the man at the forefront of keeping American roots filled with the rockin’, gritty heart of the 60’s music revolution, has just announced a new album, and has released a new song in conjunction. Ray Wylie Hubbard, known down in Texas as the Wylie Lama for the wisdom he imparts to songwriters and sound engineers alike to keep the music adhering to his “grit, groove, tone and taste” mantras will release his newest record The Ruffian’s Misfortune on April 7th through his own label Bordello Records. It will be his first album since 2012’s The Grifter’s Hymnal.

“I really liked ‘The Grifter’s Hymnal,’ and I think ‘The Ruffian’s Misfortune’ is still kind of a part of that,” Hubbard says about the album. In fact it’s reportedly the second album of a trilogy, with The Grifter’s Hymnal comprising the first installment. “This record is pretty much where I am as far as trying to make records that work on a couple of different levels, by laying down a groove with cool guitar tones and vicious nasty licks with lyrics that have a little depth and weight and even a little humor thrown in, too, as life is pretty much like that.”

The album was recorded in Driping Springs just outside of Austin in early/mid July. “George Reiff is the engineer with dumbo ears who hears things no one else hears and as a producer has ideas that can only come from someone baptized in the deep roots rock river of cool,” Hubbard said at the time. “Gabe Rhodes and Lucas [Hubbard] (Ray’s son) done the guitar things that needed to be done to insure some drool and Rick Richards laid down some grooves that a sideshow carnival shake dancer would love to wiggle to.”

Ray elaborated some more on the album in late August during the mixing process. “Here’s my mixing credo to make a roots rock record: take out the lip smacks, leave in coughs, string buzzes, pedal squeaks, 60 cycle hums and have George Reiff mix it…I really think if I were given the budget and opportunity to work with any producer/engineer in the world, I would still pick George or Gurf [Morlix] or Lloyd [Maines]…They have hearing given to only a few and they have impeccable taste and they dig the grit and honor the groove and they search for tone like it was the grail and nothing cliched or mundane or less than ultimate cool get by them.”

As part of the announcement of the new album, Ray Wylie has released a new song called “Chick Singer, Badass Rockin'” which pays tribute to the women of rock like Joan Jett and Chrissie Hynde, while also taking a not so subtle jab at Music City with the line, “since Nashville country is pissants.”

Ray Wylie Hubbard will also be releasing an autobiography in 2015 called A Life…Well, Lived.