In the first part of my interview with Texas songwriting legend Ray Wylie Hubbard, we talked about how he wasn’t proud of the end result of the movie Last Rites of Ransom Pride of which he co-wrote. In the second part we turned out attention to more positive things, namely his latest album A. Enlightenment B. Endarkenment (Hint: There is no C) that is up for Saving Country Music’s Album of the Year.

Though Hubbard is know as a songwriter first, I was amazed at the scope of the production of Enlightenment, of which Ray had a heavy hand in. Ray’s also been producing albums for other artists lately, maybe becoming just as well-known and sought after for his studio work as his mastery of lyric writing. And at the same time, Ray is helping define the nexus between country and blues music for our generation. For a 63-year-old, he has an astounding amount of potency, and a wealth of fresh ideas.

Triggerman: How old are you Ray Wylie?

Triggerman: Here’s some lyrics from your new album : “She called me up one time and said let’s go get tattoos. I said well let me brush my teeth and find my shoes. She came down the street in a stolen Volkswagen. She smiled and said she decided on a crimson Chinese dragon.” So at 63-years-old, what are you doing writing lyrics like that?

Ray Wylie Hubbard: This album has a foot in both worlds. I feel very fortunate that I can write a fundamental hillbilly mountain gospel song about the Apocalypse, a song about resurrection, and get in a mindset where I can write it as I believe it. And also write songs like “Drunken Poet’s Dream” and “Opium.” I don’t know where it comes from. “Coming down the street in a stolen Volkswagen.” You can see that image and you can all of a sudden see this girl, this cool kinda sleazy girl, with a heart of gold though. You can see why this musician would love her and have respect for her, when maybe nobody else did. 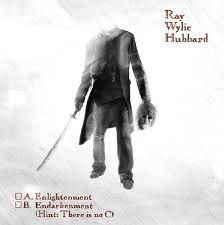 Triggerman: A lot of times when artists get older they want to push, either they want to be more edgy, or maybe they just turn the distortion up on their guitar too loud, because they think that’s something that will keep them young and hip. What I was impressed with is that it doesn’t feel like that. It feels natural, like a progression. The other thing that’s interesting is the production. When you were younger you were known more as a singer/songwriter which is based heavily in lyricism.

Ray Wylie Hubbard: I’m fortunate to have worked with Lloyd Maines and Gurf Morlix, and from them, I think I learned grit, and groove, and tone and taste. Even if you’re gonna take a 1×12 and put it on two bricks and stomp on it with a combat boot like we did on “Enlightenment” it still has to sound cool, you know? It’s got to sound right, and I’m a great believer in tone. I can use an old Bell & Howell amp from the 50’s that they used to use to show movies with, or an old Supro with a burned out speaker. Because if you look back, the records that I like were old guys that didn’t put on new drum heads or change strings when they went to play, they just played with what was available, but they had a tone that is just beautiful. I think I care. I care about trying to write really good, unique songs that sounds sonically just cool. And playing with Gurf and George Reiff and Rick Richards makes it so easy.

Triggerman: You’re talking a lot about gear. I wonder how accessible it is, but in the album you talk about playing a lipstick pickup through a Fender Tweed. Or on another song you’re talking about how you’ve got a French Harp but it’s in the key of ‘C’ but the song is in the key of ‘G’. The way I kind of explain Ray Wylie to people is that back in the day, he was a musician that other musicians would listen to. So when you put those gear references in there is that for your own enjoyment? Do you chuckle thinking about other musicians? Or do you write what you know about?

Ray Wylie Hubbard: I have this incredible freedom that I can write about whatever I want to write about. I don’t have to worry about writing a hit song. I couldn’t if I tried, you know. That freedom, it also gives you the chance to be fearless in what you write about. I think to have that freedom to be fearless, just write not thinking about the future of the song, just put it in there. Well, nobody is going to know what a lipstick pickup is. Well, that’s not my problem. (laughing) Young kids come up to me and ask me about songwriting, and one of the first things I say is read The Grapes of Wrath, just don’t listen to “The Ghost of Tom Joad.” Go back and read, and find out where that came from. The deeper the roots, the stronger the branches.

On Thursday night I had the pleasure of seeing Ray Wylie perform at Suzanna’s Kitchen in Wimberley, TX with his long-time drummer Rick Richards. Sitting in for the last few songs of the set was fiddler Ruby Jane.