Ready To Write Her Own Story – An Interview with Ashley Campbell

**Editor’s Note: This interview was conducted by Ken Morton Jr. He is a distinguished country music writer, and the Owner/Editor of That Nashville Sound. He will be regularly contributing quality interviews and other content to Saving Country Music. 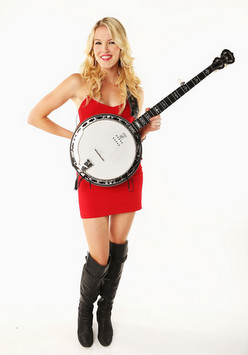 Ashley Campbell knows a lot about leaving behind a musical legacy. As the daughter of Country Music Hall of Fame member Glen Campbell, she not only grew up watching her legendary father deliver country standards such as “Galveston,” “Wichita Lineman” and “Gentle on My Mind,” but on his Farewell Tour before the diagnosis of Alzheimer’s finally claimed his mind, she played right alongside him. A highly proficient banjo-player, Ashley soaked in and celebrated each of those performances, knowing each one moved her one step closer to both having a fuller understanding of her father and moved him one step closer to a losing him to an unrelenting disease.

It was also on that tour, however, that a filmmaker named James Keach began the work on a powerful new documentary on the Campbell story and legacy called I’ll Be Me. The film also spawned a recently-released soundtrack, made most-notable by the Grammy-winning performances of “I’m Not Gonna Miss You” by Glen and “Gentle on My Mind” by The Band Perry. While those performances are powerhouses, indeed, they share the spotlight with two impeccable songs written and performed by Ashley. The soundtrack’s “Remembering” could just be the most poignant and human song released this year. Written at the conclusion of that fateful tour as the debilitating brain disease took away her father’s memories, the track delivers a heartfelt and heart-wrenching message of that incomprehensible loss with an earnest honesty that can only be earned the most difficult of ways. It’s powerful songwriting at its best and sets a high bar for what comes next for the songwriter.

What comes next is a record deal with Dot Records and the opportunity to cut more “songs that last” in the studio for her first solo album release. Saving Country Music got a chance to catch up with the budding star to talk about being part of her father’s documentary and soundtrack- and how she plans on leaving a profound musical legacy of her own.

In some ways, it is probably difficult to separate your musical story from your father’s. Provide some perspective on what it is like making your own way through Nashville with such a big legacy to follow.

You can’t really hide the fact that I’m Glen Campbell’s daughter. I hope that people don’t think that it’s the only thing that I am. I would hope that my music and my musicianship would speak for itself. Hopefully, they can connect with my music separately.

On the other hand, it has helped a lot. It helps a lot because people have a lot of love for my dad so they seem a little more open to hearing my music and hearing what I have to say.

You mentioned musicianship and I know banjo is your instrument of choice. Why the banjo?

I was in college at Pepperdine University and I was a theater major. My junior year, I was in a production where I had to learn to play the banjo. I had a reputation of being able to pick up an instrument and learn it fairly quickly. I had always wanted to learn the banjo but had never gotten around to it. The theater department paid for me to have a couple of lessons and bought me a little banjo. It clicked and I absolutely fell in love with it and have been playing it ever since.

Did you have aspiring music goals prior to that moment?

Not really. I wanted to be in L.A. and do the whole acting thing. But that instrument totally changed my perspective on music. It opened up a different side of me that I had never known.

So it was the instrument that opened that door for you?

It was. It was the instrument and how it sounded. It was how it made me feel while playing it that opened that door.

Was it just out of college that you discovered that music was the career path you wanted to travel down?

It was right after I graduated. I went on tour with my dad to Australia and New Zealand. At first, I was just going down there on vacation and to watch the shows on the tour. But they said, “Hey you play banjo, you should be in the show.” I kind of accidentally fell into it and I fell in love with it. They wanted me to keep touring with them so I did.

Tell me about that and the Goodbye Tour. I’m sure that had to have been a very powerful and emotional time with your dad and family.

It was a very emotional time. We were lucky enough to have James Keach and Trevor Albert film the whole thing and have this amazing documentation to look back on. It was an amazing time and what was most important to me about that time was to spend so much time with my dad and get to know who he was on stage and get to know him better off stage.

Were there differences between those two Glen Campbells?

Not really. He really was who he was both on-stage and off-stage. It really was just him. The off-stage version is just obviously the more intimate side of him.

All things considering, how is your father doing these days?

He’s healthy, but he’s in the late stages of Alzheimer’s. He’s not aware of what’s going on.

Walk me through your impression of the documentary and the soundtrack as a whole.

The soundtrack turned out really great. I love the song that The Band Perry did with “Gentle on My Mind.” It’s my very favorite John Hartford song. I just feel really honored and really blessed to have two songs on there and that they were originals that I wrote for my dad. That they can be shared with the whole world is pretty special.

“Remembering” might be the most poignant thing I’ve heard in recent memory, especially when you consider all the circumstances in and around its creation. What does it mean to you with it being your first release as a solo singer/songwriter?

I started writing that song a few years ago. I had the first verse idea and the melody. When I moved to Nashville, I got together with one of my favorite songwriters, Kai Welch. I trusted him lyrically and musically enough to entrust him with this story and song. We ended up writing this whole song together in June of 2013. It just really clicked and I’m really happy with it. It means a lot, obviously, with everything it says. What it is about is the relationship between a father and a daughter as it’s changing as everyone gets older. Your parents take care of you when you’re young, but then when they’re older, it’s your turn to take care of them, whatever that means. They might get sick, like my dad did with Alzheimer’s. I ended up being his caretaker along with my mom. It’s just a complete relationship 180.

Did you have any idea when you were writing it that it would be included in with either the film or soundtrack project?

I had no idea. I just wrote it because I needed to write it. At no point, did I ever thing, “Oh boy, I need to push this onto everyone.” (Laughter) I just wrote it to say something I needed to share personally. We were doing some demos shortly after that and we were thinking radio demos, radio demos, radio demos. I asked if I could throw this one down so I could just send it to the guys who were finishing editing the documentary. I had an idea that they might just want to use it for the film. So we laid it down that day and I sent it over and people starting freaking out about it.

It has to be special that this is your first solo song release.

Yes. Definitely. I’m glad that my first song that ever got released means so much to me and hopefully to a lot of other people who love my dad too. That’s a better message than a song about a truck or something. (Laughter)

If you look into your crystal ball, what do you see for your own musical future and what do you want your own mark in music to look and sound like?

I’m hoping to make an album this year. I’m signing with Dot Records very soon and I’m very excited to be making my album with them. I’m hoping that my future in music is to just bring really good songwriting and great musicianship into the mainstream. I would love for it to be more about albums and experiences again and not just about singles.

What do you see your differentiation as an artist in the country landscape? Is it with songs that have some deeper content lyrically and musically?

Very much so. I want to build music that’s built to last. I want people to be able to listen to it years from now and not identify it with a specific time or era.

Either from your dad’s deep catalog of songs or from other influences, what are songs that you feel with influence what your album will be shaped like?

“Gentle on My Mind” is definitely one. It has stood the test of time. It was this banjo folk song and then my dad recorded it and turned it into a pop country hit. Now The Band Perry has recorded it and it’s a major country single again. I think the reason for it is that it’s just about being human. Hopefully, when people hear my music, that’s what it will be about. Just be human.

I have one last question for you and this one is meant open-ended. What is country music to Ashley Campbell?

Country music to Ashley Campbell is the telling of an emotional story. It doesn’t matter if it’s happy or sad or nostalgic. It just has to tell a story and evoke some kind of emotion and be real while doing it.

Listen to “Remembering” here below: