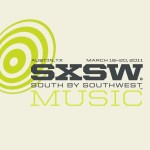 South by Southwest last year was my first full on experience with the event that brings over 8,000 bands from all over the world to Austin for 5 days of musical mayhem, and it went great. With proper pacing and maybe a little luck, I got everything out of the experience I could ever want. 2011 was one of those experiences you hear many people talk about that is proceeded by “…and I will never go back.” But now that I live near Austin, SXSW comes to me whether I want it to or not. I can’t fool myself into thinking those lineups will not tempt me back, and overall, there was more good than bad.

It started Wednesday at noon with a brief stop to watch Ruby Jane with her duo lineup, and then I headed to the “American Songwriter” showcase at Swan Dive, where I would spend the majority of the day. I got there just in time to catch the last two songs of Jessica Lea Mayfield, and then see an unfortunate incident between her and the guitarist for Apache Relay where some spit was swapped, but not in an affectionate manner. It was pretty appropriate to how the week would go. By happenstance I found myself sharing a couch in the back with Hayes Carll, who i’d just recently written a mixed album review for.

Triggerman: Hey, my name’s The Triggerman from savingcountrymusic.com

Hayes: Oh yeah, I just heard about that site the other day. That article.

But Hayes was a really cool guy. His set was just like I asserted in my review: fun with good songs and worth hearing. But Townes Van Zandt, he is not. I was also able to speak at length with Caitlin Rose, though unfortunately that interview might be lost. She was a highlight of the American Songwriter showcase, and of SXSW in general, and will likely get her own live review coming soon.

Next was Jason Isbell, who I just found hard to get into without a band and in such a big, crowded room. I was glad to see Amanda Shires with him on fiddle; that was a treat. Jason may have some good songs, but he is no Justin Townes Earle. He needs a band. The Civil Wars were an unexpected treat as well, though just like I tweeted afterwards, I have serious reservations that a duo that spends their whole set lovingly gazing into each other’s eyes has any staying power or deep appeal. It’s just too hokey, effeminate, and in the end inaccessible by most for admittedly bias and unfair reasons. Their vocal antics cannot be denied though. They were the best two singers I saw all week, and paired up they were better than the sum of their parts, but I walked away with question marks about their songwriting as they covered a nursery rhyme, and Michael Jackson’s “Billy Jean”. They smacked of a trend.

Later that night found me out of the downtown corridor, and north at Spider House where I saw Slim Cessna’s Auto Club. I couldn’t add more accolades that what I gave them last year at SXSW, but putting aside the Austin bands I see frequently like Ruby Jane and Possessed by Paul James, they were the best performance I saw all week. Unfortunately I was only able to catch the last few songs of Otis Gibbs after Slim Cessna. What I saw was good, and reminded me a lot of a road warrior version of Roger Alan Wade.

Thursday I had to take a breather if I was to make it through the weekend, and so the only show I caught was Trampled by Turtles in the early evening. The showcase at Homeslice Pizza was running an hour late, and an over-served hipster dumped two full glasses on beer down the from of me as I stood in the packed parking lot. The Turtles were great, but not appreciably better than their albums, if that makes sense. Their albums are great, and their live set is great, but seeing some bands live raises their value. 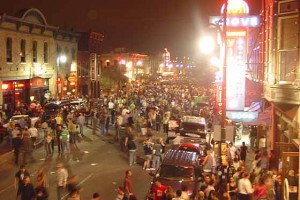 Friday morning I tried to juggle too much, going back and forth from The Bloodshot Records Day Party, to Opal Divine’s for the TeXchromosome showcase for women artists. I did bump into Izzy Cox, and got to see Ted Russel Kamp perform with Robin Wiley, and Ted Russel gave me a copy of his new CD out in May. A morning blown in commuting back and forth was made up for by the Hillgrass Bluebilly XSXSW Showcase at Hole in the Wall north of downtown. The Harmed Brothers kicked the show off with a really cool unmiked, unplugged set in the middle of the bar. Soda and Shake It Like a Caveman brought two version of amazing muddy blues, and not particularly bluesy or country, but very good was Drag The River, who I had honestly never heard of until then. Very good, honest songwriting and good energy from Drag The River.

Possessed by Paul James headlined, and folks, Possessed is honestly becoming a top tier performer in the underground movement. I mean it is time to start including his name with people like Hank III, Wayne “The Train” Hancock, and Scott Biram. His set was dogged by technical problems, which seems to be common with him, and this resulted in him singing three songs a capella, but like always, the problems almost lend to the show, and create cool scenarios and moments that would have never been if everything went perfect. The Hillgrass showcase was also the first place I got to meet Jason and Anthony Galaz of The Muddy Roots Festival, and Autopsy IV of ninebullets.net.

And speaking of, Saturday started with a ninebullets.net showcase in east Austin, where I got to see the great Austin Lucas with his sister on banjo perform (video coming), and one of the best highlights of SXSW, Two Car Garage. Because there were logistics issues at the beginning of the showcase, Two Cow played an unplugged, acoustic set. It is not really country, but folks, this was some of the best, soulful songwriting I heard all week. You will be hearing more about Two Car from me soon.

Then it was on to the madness of downtown and Hellbound Glory at the Rusty Knuckles showcase. Hellbound was as spectacular as I could expect. Excellent energy, amazing songs, and they played a lot of new ones as well (video coming). I can’t emphasize enough that Hellbound Glory deserves top billing. They should be huge. Leroy Virgil is a genius country songwriter, and Chico is the best full-on drummer in country music right now.

Then I had to hike on foot all the way across town to the roof of the Whole Foods headquarters for a Ruby Jane show. It was worth the walk. Then it was back to downtown for the Bloodshot Records official showcase at Red Eye Fly. The night was dogged with sound issues, especially during the legendary Waco Brothers’ set, though they are so good and so fun, they can power through anything. Luckily they got the sound problems resolved before Ha Ha Tonka took the stage; one band that I swore I would spend more time with after last year’s Bloodshot showcase, and I will swear I will again. Excellent harmonies, fun energy, good songs, and a new album coming out next week.

Then Whitey Morgan & The 78’s capped SXSW 2011 off shortly after 1 AM, with a ball-crushing set of real deal, honky-tonk Outlaw country that included Eddie Spaghetti joining them on stage for Merle Haggard’s “Mama Tried”. Last year right before SXSW is when it was announced that Whitey had signed with Bloodshot. A year later, they have arrived, and in a huge fashion, headlining the whole event.

If I were to take four big things from SXSW, that would be one of them: the arrival of Whitey Morgan & The 78’s as a premier, accepted, and loved honky tonk band. The other three would be the songwriting of Two Cow Garage, the continued badassedry of Slim Cessna’s Auto Club live, and the potential of Caitlin Rose.

(stay tuned for an upcoming video recap as well)