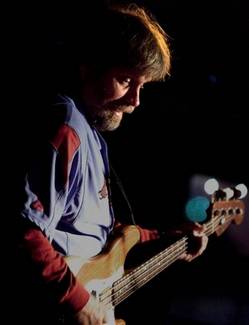 You may not be comfortable with how exactly to define the quasi country, quasi-rock music that comes out of the Texas / Oklahoma region known as Red Dirt, but what you can be confident in is that it would never have come to life like it did without a man named Tom Skinner.

Along with Jimmy LaFave and the late Bob Childers, Tom Skinnner was one of the founding fathers of the music nicknamed for the clay-laced earth deposited throughout the region that gives the Red River dividing Texas and Oklahoma a burnt red hue. More of an attitude than a sound, the term “Red Dirt” encompasses the rock music of Cody Canada and the hard country of Jason Boland all the same. The only constant is they all got their start in Stillwater, Oklahoma, under the tutelage of Tom Skinner and others.

“He got me into the Bull Pen in Stillwater when I was 17,” says Cody Canada. “Told him all I wanted to do was listen to him….I wouldn’t drink. He said “Grab that guitar….tell them you’re my nephew!”

But it wasn’t just his shepherding of younger artists that made him so loved and revered throughout the Red Dirt music world. Most of all it was his songwriting.

“I think maybe I get more credit as a writer than I deserve,” Skinner said to American Songwriter in 2012, showing off his signature humility. “I know so many great songwriters, and I want to do the best material I can get my hands on, and a lot of the time those are friends of mine’s songs.”

It would be hard to call Tom Skinner prolific, but that was only because his songs meant so much to himself and the intimate crowds that he shared them with that he never put too much effort into being a big recording star. It was how his songs touched and inspired the artists around him that was his most lasting gift. Skinner was coaxed into recording a self-titled album with the Mike McClure Band in 2012 that impressed another notable Stillwater resident, Garth Brooks, who looked up to Tom Skinner so much, he once begged to be in Skinner’s band before he hit it big.

“I know Tom Skinner well enough to say that making a record of his original recordings was not something he was easily talked into doing and hats off to McClure for getting it done,” Garth Brooks said at the time. “Tom is very private with his music because the stuff that he writes is extremely personal. This is a very, VERY special gift from Tom to all of his fans ”¦ of which I am one.”

Skinner recorded some albums earlier in his career, but decided it wasn’t for him and he was simply going to play live. In Stillwater, and beyond, he was a pillar of the music scene. A Oklahoma State Alumni, and an inductee into the Oklahoma Red Dirt Music Hall of Fame, his songs were covered by many Red Dirt artists, including Cody Canada, Stony LaRue, the Red Dirt Rangers, and many more.

“I really do appreciate the way those younger guys treat me ‘cause they treat me good, with respect,” Tom Skinner told News OK in 2012. “But it’s sort of baffling, too, because I wasn’t inventing anything. I just wanted to be John Prine or Graham Parsons real bad, you know, that’s all I was doing was imitating those guys and playing and having a blast. It wasn’t like I was in a lab making any secret thing up.”

Bass player, songwriter, and father of Red Dirt music Tom Skinner passed away Sunday evening, July 12th after a long bout with health issues. He was 61-years-old. He will leave a hole in the Texas / Red Dirt music scene the size of Oklahoma.