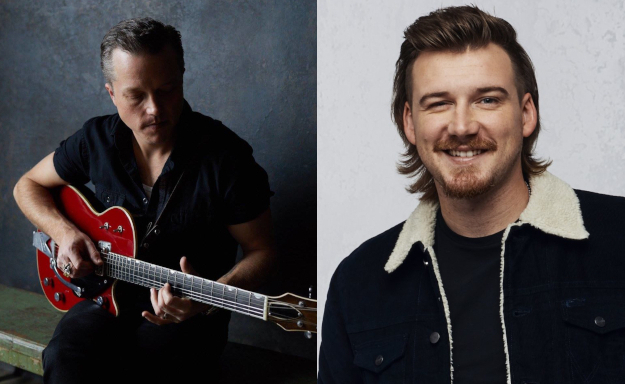 It’s time. In fact, it’s well past time. And the people calling the shots shouldn’t make the same mistake they did with Chris Stapleton’s rendition of “Tennessee Whiskey,” which could have been a huge single on country radio if they would have just pulled the trigger as opposed to following a designated script written months in advance like automatons incapable of calling an audible when a clear and obvious musical phenomenon is transpiring right before their very eyes. Making decisions on Music Row is like making a U-turn with an aircraft carrier, and it’s often to its detriment.

We’re talking of course about Morgan Wallen’s cover of Jason Isbell’s song “Cover Me Up.” Released in studio form earlier this spring (read SCM review) after a video of an acoustic version of the song blew up, it has quickly made one of the signature songs of Isbell’s 2013 breakout record Southeastern into a standard being covered not just by Morgan Wallen, but many budding performers from mainstream country to independent Americana.

Morgan Wallen was opening for Luke Combs this week during Luke’s two-night stint at the Bridgestone Arena in Nashville, and decided to play the song for the sold out crowd. “This song right here is special,” Wallen said. “I always make sure to say this every night I play it. This is a song that I did not originally write. It’s written by a guy who’s one of my favorite artists and one of my favorite songwriters of all time. A guy named Jason Isbell.”

Wallen went on to explain how he started playing the song just for himself, as a warmup backstage for his voice. But after a few folks heard it, they goaded him into performing it, and eventually recording it as a standalone single. “I was a little skeptical at first because I knew I’d get some heat for it, and I have,” Morgan says. “But it’s been mostly love.”

The people giving Morgan Wallen heat are mostly Jason Isbell fans who feel this song is so intimate to Jason Isbell and the moment his wife Amanda Shires got him sober, it’s sacrilege that anyone would ever cover such a tune, especially someone like the mulletted Morgan Wallen who got his start his start gesticulating with Florida Georgia Line on a shoreline in the video for his breakout single “Up Down.”

But the people who take issue with Morgan Wallen or anyone else covering this song need to get the hell over it. Not only is the Morgan Wallen cover quality, it’s comes with a ringing endorsement from Jason Isbell himself, who has addressed the concern from his fans ad nauseam, including after the latest eruption of anger at Morgan Wallen for having the audacity to perform the song on Jason Isbell’s home turf of Nashville.

“It can be so painful to bring a song from your heart into the world then watch it start to fade away after a year or two,” Isbell said. “I feel like ‘Cover Me Up’ is very much alive right now and I’m so grateful for that.”

Isbell’s also pointed out numerous times (along with others) that this cover is very directly making him money. It really is a win/win for Isbell, where he gets paid each time the song is streamed, downloaded, or performed, while the spike in name recognition can only be good for business.

Jason Isbell added Saturday morning (12-14), “Guys it’s really cool that Morgan Wallen is singing my song. That’s what I’m trying to say. Everybody just relax. You’re about to have to deal with your family at the holidays. This isn’t a thing to stress over.”

And don’t think of Morgan Wallen as just another 2nd-rail pop country star. 2019 has been a breakout year for the 26-year-old from Sneedville, Tennessee, for better or worse. This week Billboard released their end-of-year stats for 2019, and it wasn’t Luke Combs who had the biggest airplay single this year, despite his dominance in pretty much every other metric in the genre. It was Morgan Wallen’s “Whiskey Glasses” that received more spins than any other single all year due to its elongated climb on the charts. Morgan Wallen might be selling out the Bridgestone Arena himself in the coming years, and covering “Cover Me Up” when he does.

All the more reason for his label Big Loud to get off their duff, and release “Cover Me Up” as Wallen’s next radio single. They’re already four singles into his current record, and it would make the perfect transition into the single cycle of the next album. If they did so, it would not only become an immediate hit, it would automatically be qualified for CMA, ACM, and Grammy Song of the Year nominations, and likely win, giving Isbell a trophy as well. This is what happened when Darius Rocker covered Old Crow Medicine Show’s “Wagon Wheel.”

Remember, Jason Isbell was the first truly independent artist in recent memory to receive a CMA nomination for his record The Nashville Sound—something we never thought we’d see. But he’s so well liked in Nashville proper, they have allowed him into the mainstream fold.

Look, we all get that Jason Isbell and “Cover Me Up” has brought many Americana fans so much musical joy over the years, and perhaps your relationship with the song is so intimate, you just can’t imagine someone else performing it. But this is the way the system in country music is supposed to work: songwriter pens universally-resonant song, and mainstream performer takes it to the masses. The fact that the pool of contributing songwriters to country contracted by some 90% over the last decade to where it’s now basically just Ashley Gorley and Shane McAnally sitting in a room pumping out radio singles is the reason for the creative malaise country music is currently in the midst of.

What would “Pancho & Lefty” be if Willie and Merle hadn’t recorded it back in the day? It would have been a forgotten album cut on an Emmylou Harris record, and a song Townes Van Zandt performed for 22 people at the Old Quarter in Galveston. Instead, it’s become part of the fabric of American culture, even with the completely horrible early 80’s synth opening.

Luckily for Jason Isbell, he didn’t have to die in relative obscurity on New Years Day in the throes of addiction like Townes Van Zandt did to finally be considered legendary. That’s the lesson encapsulated in “Cover Me Up.” And it’s the lesson everyone should have an opportunity to hear, no matter who is singing it.