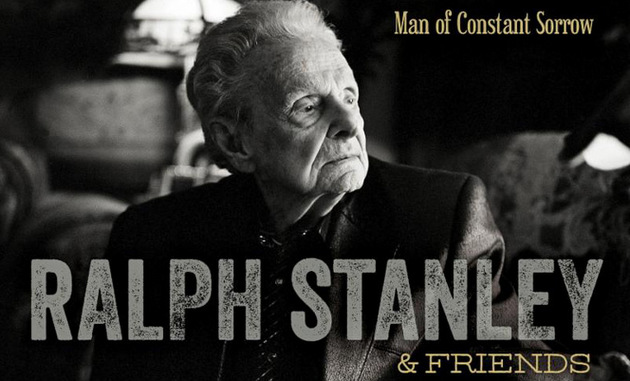 It was all doom and gloom and teary-eyed salutations when Dr. Ralph Stanley announced in June of 2013 that he would be embarking on his farewell tour in late 2013 into 2014. It was supposed to be the last time we would be able to see The Man of Constant Sorrow grace the bluegrass stage. But Stanley has always been one to have restless bones, and even before the farewell tour began in earnest, he was already saying he wasn’t ready to retire. “I meant it at the time,” Stanley says about the premature proclamation. “But I’ve decided to leave it up to the good Lord.”

Since then Stanley has continued to tour with no signs of slowing down, despite being 87-years-old, and losing his right hand man and guitar player James Alan Shelton last year. Now Dr. Stanley has a new album in the works. Ralph Stanley & Friends: Man of Constant Sorrow is scheduled to be released on January 19th, and will be distributed through Cracker Barrel’s country stores. It will also be available digitally through iTunes, Amazon, etc. It features 13 brand new tracks, all but two of which match up Stanley with some of the greats of bluegrass and beyond, including Ricky Skaggs, Del McCoury, Dierks Bentley, Lee Ann Womack, Elvis Costello, Robert Plant, and Old Crow Medicine Show.

“I have always enjoyed performing with other musicians ever since my older brother Carter and I first started playing music together when we were kids,” says Dr. Stanley. Carter and Ralph first started out as performers 68 years ago, backed by the Clinch Mountain Boys. “I am excited to share these collaborations with such wonderful artists with our fans. So many of my fans are regular visitors to Cracker Barrel, so I’m happy to have my project available exclusively there so they can find the CD in one of their favorite locations.”

The songs on Ralph Stanley & Friends will be familiar to many Ralph Stanley and bluegrass fans, but the recordings are all brand new. The effort was co-produced by Buddy Miller and Jim Lauderdale, who also appear on a new rendition of the song “I Am The Man, Thomas.”