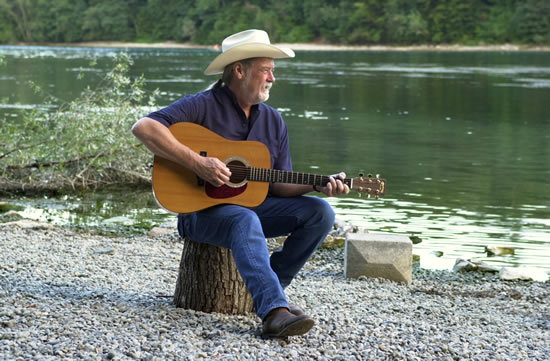 The uniquely winding road that was the life of songwriter Richard J. Dobson has finally reached its destination. A talented wordsmith and singer whose efforts often put him in the same breath of composers such as Townes Van Zandt, Guy Clark, Rodney Crowell, and “Skinny” Dennis Sanchez, died Friday, December 16th in Diessenhofen, Switzerland where he lived. He was 75-years-old.

Diessenhofen is a far flung location from his place of birth among the tall pines of east Texas, where Richard James Dobson II was born on March 19, 1942 in the city of Tyler. However it was Dobson’s experiences living abroad when he was young that would fill him with the wanderlust that would be one of the primary markers of his adult life and musical career. When he was eight-years-old, Dobson was living with his family in The Hague, Netherlands, where he attended an English school and took his first piano lessons, which he says did not go over very well. However when he was 20-years-old and living in Cali, Columbia, he purchased a secondhand guitar and was right back on the musical horse.

Richard Dobson attended college at the University of St. Thomas, worked on shrimp boats and oil rigs on the Texas coast for money, participated in the Peace Corps, tried to become a published author while living in New Mexico around 1960 to no avail, before being inspired by Kris Kristofferson and Bob Dylan to pursue what he hoped would be his calling: a songwriter.

Similar to the other gaggle of talented Texas-born songwriters in the 70’s such as Guy Clark and Townes Van Zandt, Richard Dobson spend a majority of the decade going back and forth between Texas and Nashville, trying to sell songs, trying to get cuts with bigger artists, and sometimes being successful. Richard Dobson’s “Piece of Wood and Steel” was recorded by David Allan Coe, “Forever, for Always, for Certain” and “Old Friends” were covered by close friend Guy Clark, Lacy J. Dalton cut “Old Friends,” Nanci Griffith covered “Ballad of Robin Winter-Smith,” and Kelly Willis recorded “Hole in My Heart.”

But none of these were the super hits that would put Richard Dobson on the path to songwriting ease that many of his Texas-born contemporaries enjoyed, so Dobson started rambling and writing once again. Though Dobson’s discography is extensive, covering some 23 records from 1977 to his latest release Plenty Good People with WC Jameson recorded in Georgetown, TX, he was also a prolific writer. Thoughout his career he wrote scantly-distributed periodicals such as the Omaha Rainbow and Don Ricardo’s Life & Times, and later penned the autobiographical The Gulf Coast Boys about the time with his fellow Texas songwriters, and a second book Pleasures of the High Rhine — A Texas Singer in Exile. Dobson permanently moved to Switzerland in 1999, where his long-time label Brambus Records was located.

Though semi-regularly making his way back to the United States and Texas, the dual citizenship of Dobson helped raise the mystique of his music. He was out-of-sight, but never completely out of earshot. Being the “other” songwriter from that iconic time of the profession that never made it as big gave him almost a magical quality. Dobson’s legacy was secured by his appearance in the classic musical film Heartworn Highways, where he performs a rendition of “Forever, for Always, for Certain” in Guy Clark’s kitchen that has gone on to be appreciated by generations of music fans and songwriters.

Richard Dobson never found the fame many of his more recognized songwriting contemporaries did, but he was cherished as an equal by them, and the fans who sought out his music, and followed his journey from continent to continent, inspired and intrigued by his free spirit, his capability with words, and his ability not just to tell great stories, but to live them.