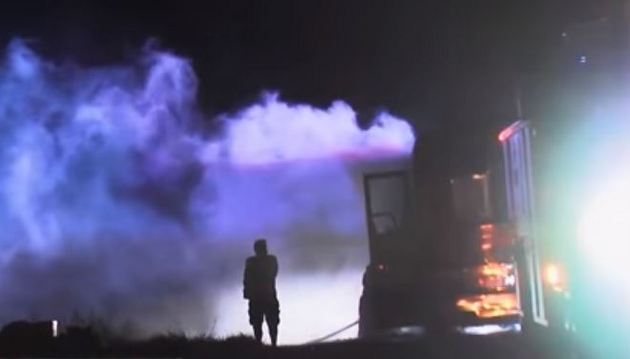 We’ve seen flames adorning The Reverend Horton Heat’s Nudie suits, flames painted on Jimbo’s standup bass, flames painted on many of the hot rods you might see pull up to a Horton Heat show, and Jim Heath can blaze on his signature Gretsch guitar like few others. But flames coming out of the side of their tour bus while smoke fills the cabin full of sleeping band and crew members is not the style the band was going for.

Everyone is alright, but there were some harrowing moments for the Reverend Horton Heat and his road crew after their tour bus caught on fire on Interstate 5 in California, just north of Oceanside early Wednesday (3-23) morning. The psychobilly band was en route to a show Wednesday night at the Belly Up in Solana Beach when apparently a malfunctioning generator started the fire. All seven members of the band and crew were able to exit the bus without injury as it filled with smoke, and luckily all the gear was stowed in a trailer that was not affected by the blaze.

Jim Heath, known as The Reverend Horton Heat, was the first one to detect the fire, and had to wake up his sleeping band and crew members to get them out. Fire crews from nearby Camp Pendleton responded quickly to the blaze.

“It happened very quickly,” said Heath to 10 News out of San Diego (see below). “I woke the guys up as quickly as I could and tried to get them out of there because it was already filled with smoke.”

But despite the issue, the show must go on, and The Revered Horton Heat are playing their concert in Solana Beach with Unknown Hinson and the Cadillac Tramps Wednesday night as planned with a brand new story to tell, and hopefully a new tour bus on the way. They have shows Thursday, Friday, and Saturday nights in California before taking a week off and resuming their tour in April.