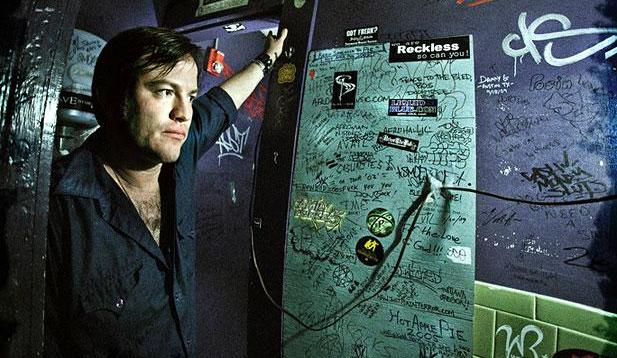 It’s the fall of 2007, and a mother and daughter from the little town of Lindale in east Texas are driving through New Braunfels, TX, just south of Austin, known nationally as the home of the historic Gruene Hall, when their car breaks down. Instead of stressing out about it, they decide to get a hotel room and a drink, and stumble into a rustic old bar called Tavern In The Gruene.

It is a Tuesday night, and like most every Tuesday night at the Tavern In The Gruene, Texas singer songwriter Ray Wylie Hubbard is doing his Roots and Branches radio show live on KNBT, showcasing songwriters from the Texas scene. On the stage is a well-seasoned, but somewhat obscure songwriter named Adam Hood from Opelika, Alabama. The two stranded travelers from Lindale listen intently to Adam’s songs and are so impressed, the daughter waits until after the show to talk to him and Adam gives her a copy of his current album.

After listening to Hood’s music and falling in love with it, the mother and daughter decide to book Adam Hood to play a birthday party in November in Chicago for the daughter. The mother’s name was Beverly Lambert, and her daughter had just released a CD of her own, Crazy Ex-Girlfriend the went on to be named the ACM Album of the Year. As you might have guessed, Miranda Lambert was the weary traveler who’d stumbled on to Adam Hood, and knew she’d just discovered songwriting gold. 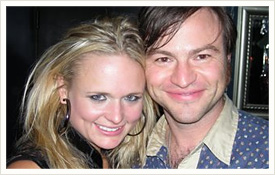 Soon Adam Hood was signed with Carnival Music Publishing and Carnival Records, the baby of Miranda’s producer Frank Liddell—the man also known for producing records for Stoney LaRue, and being married to (and producing) Lee Ann Womack. It’s a small world, but Adam Hood soon became a big songwriting cog in it, moving to Nashville to work as a professional songwriter, and becoming one of the most prolific song contributors to the Texas scene, churning out signature tracks for Wade Bowen, the Josh Abbott Band, Whiskey Myers, and too many more to name, and even some songs for some bigger names like Little Big Town. Hood wrote “I’ll Sing About Mine” with Brian Keane that was nominated for Saving Country Music’s 2013 Song of the Year.

It’s because of both the prolific nature and aptitude of Adam Hood as a songwriter that you almost have to remind yourself that he’s a performer too, and a damn good one. Miranda brought Hood out on tour numerous times, as has Willie Nelson and Leon Russell. He’s currently touring with Jason Eady, who included one of Hood’s songs on his latest album Daylight & Dark. But since Adam Hood is the epitome of a songwriter who makes it look effortless—penning stories that wrench the heart and encapsulate sentiments so poignantly that his peers are flush with admiration and envy—Adam’s songwriting is where it all starts. Though as he says on a song on this new album, “It takes a whole lot of hard work to make it look easy.” 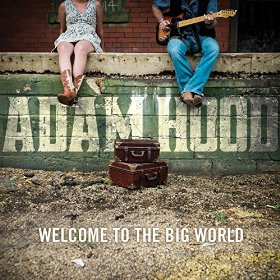 Adam Hood is not a native of Texas or Oklahoma, but he is an honorary member of the Texas country scene if there ever was one. And now that he’s officially called Frank Liddel’s Carnival Records quits, he’s back releasing his music independently and calling his own shots. Only appropriate then that he would release an album that is strikingly personal in a very palpable and meaningful manner, making the music hold a weight that it otherwise wouldn’t if it was a collection of disparate perspectives. Adam Hood has written plenty of songs for others. He wrote and recorded Welcome to the Big World for himself.

Starting out loud and heavy, Welcome To The Big World opens almost like a Will Hoge record—more rock than country, but with a country heart. Hoge wrote one of the songs for the album with Adam Hood, but it isn’t one of the beginning ones, it’s one of the more country offerings called “Postcards and Payphones” that helps anchor the more country and subdued second half of the album. The opening song “Don’t That Sound Like Love” takes a realistic, if not dystopian view of love in a very heavy bluesy style, followed up by the full tilt rocking “Trying To Write A Love Song.”

From there is where the album turns more personal, starting with title track that Hood wrote just as much for his daughter as for himself about dealing with life’s inherent struggles and trying to forge a positive attitude about things you can’t control. “Bar Band” is deceptively deep in its perspective, uniting all of America’s watering holes with the mood that can be found on any given Friday night when local musicians are providing the entertainment. “Whole Lot of Hard Work,” “Postcards and Payphones,” and “Way Too Long” is where Hood’s songwriting brilliance is revealed in full force, while the duet with Sunny Sweeney called “The Countriest” offers a simple and fun palette cleanser amongst Hood’s heavy hitting material. “He Did” written about Hood’s dad lands another gut punch, and despite all the other noteworthy songs on the album, “I Took A Train” bringing up the caboose feels like the most timeless, like an instant standard.

Adam Hood did his time on big stages, gave his shot to Nashville where he still haunts songwriting rounds with some of his friends, and his mark will forever be left on the music even if his pen fell silent tomorrow. But now he seems content with the world and his place in it.

It was a random performance at the Tavern In The Gruene that landed Adam Hood on the greater country music map, but the songwriter never left the spirit of the intimate performance and the conveyance of a personal feeling that spoke to Miranda Lambert that night, and still rings pure and potent in the 11 tracks of Welcome to the Big World.

Purchase & Stream Welcome to the Big World on Bandcamp

Purchase Welcome to the Big World from Adam Hood