Are you forlorn about what has happened to country music? Then look no further than Amber Digby.

Amber Digby’s gift is being able to hand select classic country songs from the past that never became full-on classics, but should have. And then with her band Midnight Flyer, Amber makes these songs classics by the power of her pure country voice. It’s part album making, part archeology dig, and then she adds a few newer offerings and self-penned songs to the mix for good measure. Helping her along the way is an A-list cast of contributors that includes duet partners Vince Gill and Randy Lindley, steel guitar player Lloyd Green, and piano playing Hall of Famer Hargus “Pig” Robbins, just to name a few. 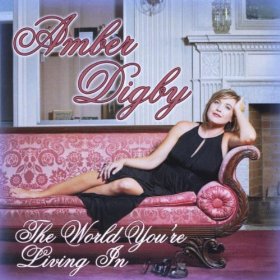 It takes a certain amount of courage to make an album like The World You’re Living In–so unapologetically steeped in the traditions of country music, specifically many of the traditions that set Texas country apart from other classic sounds originating further east or west. Making an album that is so blind to trends or trade industry desires, without a care if 98.1 will show courtesy to it in their rotation is a sign of character from Amber and co-producer Justin Trevino. Besides, she’ll get plenty of love from the Texas country radio stations that matter. Amber Digby’s country music pedigree runs deep, instilling in her the inability to compromise. Her mother, father, and many other members of her immediate family were professional musicians, and an album like this only gets made when a sincere passion for the roots of country is ever-present.

The way to pull off making a successful classic country album these days is to make sure to include the right amount of spice. Amber Digby and company do this and show wisdom on The World You’re Living In in both the song selection and the style of approach for each track. They start with a breadth of material that goes from country Outlaw Johnny Paycheck’s “It Won’t Be Long (And I’ll Be Hating You)” all the way to the classic country pop of Lynn Anderson’s “How Can I Unlove You.” Throughout is a cohesion built from an insistence to build out from the fiddle/steel guitar/true country sound. Amber’s not afraid to mix it up though, like on her rendition of the Jack Greene/Connie Smith number “If It Ain’t Love (Let’s Leave It Alone)” where the Wah-Wah pedal makes an appearance and revives the late 70’s Jerry Reed funky country feel, keeping the album fresh and delivering one of the work’s funnest tracks.

It’s hard to gloss over the fact that Vince Gill thinks so highly of Amber Digby that he appears on this album in a duet of The Warren Brothers’ “The One I Can’t Live Without.” The two met backstage at The Grand Ole Opry when Amber introduced herself as a fawning fan, and was floored to find out Vince was a big fan of her. They ended up writing “One More Thing I’d Wished I’d Said” together– a track that appears on this album and Gill’s Guitar Slinger.

As with all classic country albums, you must preface it by saying that it’s probably not for everyone. But the world we’re living in would sound a lot better if The World You’re Living In was the industry standard for what country music was supposed to be.

Purchase The World You’re Living In from Amber Digby