Of course dedicated classic country fans don’t need a sermon on Lefty Frizzell to be convinced of his contributions during country’s golden era. But to passers by, Lefty is more likely to fall within the shadow of Hank Williams and other superstar names. Hank, Willie, Waylon, Dolly, Cash, and Jones have their legacies solidified forevermore and will remain household names for many years to come. But Roy Acuff, Hank Snow, Ernest Tubb, and Lefty Frizzell give up nothing to the more recognized names when it comes to their importance to the history of country music, no matter if hipsters are walking around wearing their T-shirts, or big Hollywood studios are funding biopics about their lives.

Nobody needs to tell this to Austin, TX-based throwback country singer Brennen Leigh or the players she assembled to release a Lefty Frizzell tribute record on October 20th. On that same date in 1951, Lefty Frizzell’s song “Always Late (with Your Kisses)” was on an incredible run at the #1 spot on the country charts that started in August of that year, and continued for 13 weeks. The song went on to be covered by George Jones, Merle Haggard, Dwight Yoakam, and many more.

But you won’t find that song on Brennen Leigh Sings Lefty Frizzell, or Lefty’s best-known song, “If You’ve Got the Money (I’ve Got the Time).” There are some of the better-known Frizzell tunes like “Mom and Dad’s Waltz,” or Lefty’s late-career #1 hit “Saginaw, Michigan.” But this Frizzell tribute is more a revue of some of Lefty’s oft-forgotten classics—some penned by him personally, some just made famous by his voice—and all worthy of being remembered and cherished by a new generation of classic country fans who regularly find themselves looking back instead of forward to find songs and artists that speak to their soul.

Tribute records, just like compilations and live recordings, can be a tough sell and a tedious listen. Though the artist may really feel inspired about the material and do their best to interpret it with respect and enthusiasm, it’s still a second or third shot at recordings many folks have already heard before, and there’s just something in the human brain that latches on to the original version of a song and always remembers it as best. 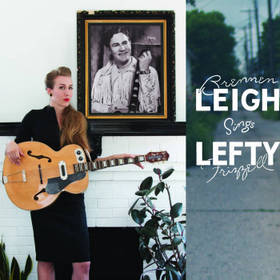 However, by smartly selecting songs that are worthy of being heard again, but are not the obvious “Greatest Hits” of Lefty’s legacy, Brennen avoids the common pitfall of tribute records. Even yours truly, Herr Führer of Saving Country Music, hadn’t heard a few of these songs before. And making her renditions that much more compelling and unique is the fact that she’s a woman singing these songs. That feminine voice and perspective naturally makes these songs something different from what they were before, even juxtaposed in certain circumstances to make the meaning of the song something different. And of course Brennen sings these songs with such exquisite love and passion, so if nothing else, this album makes a brilliant vessel for her voice.

Something else making Brennen Leigh Sings Lefty Frizzell more than your average tribute is the team she assembled to bring this album to life. She didn’t just walk into the studio with her road band and call it good. If she was going to do it, she was going to do it right. Her long-time singing partner and guitar player Noel McKay is of course on the record. So are Austin, TX country scene All-Stars T Jerrod Bonta playing the very important piano parts, and Lisa Pankratz on the drum set. Chris Scruggs lends lap steel parts like only he can as one of the premier players who “gets” that truly classic sound.

Brennen Leigh even assembled a quartet of singers (dubbed the Leftones) that includes Jenn Miori Hodges from The Carper Family, Selena Rosenblam from Rosie and the Ramblers, and Austin performers Roger Wallace and Brian Kremer. This record was a family affair, and every string was pulled to make sure each specific part was up to the standards Lefty’s original recordings and legacy set.

Brennen Leigh right now is an artist on the rise. With a song cut on the latest Lee Ann Womack record, regular residencies in Austin with the likes of Sunny Sweeney, the Brennen Leigh secret is starting to get out. You could see her pulling a Lucinda Williams in the coming years where all of a sudden the rest of the music world wakes up to what a gem they’ve had under their noses this whole time. That said, her last couple of albums have been kind of silly or side projects so to speak, and I hope we get something new and original from her soon.

In the meantime, this Lefty Frizzell record is a very nice tribute and tide over. Because it still is not original music, it naturally gets somewhat downgraded going in. But the execution of Brennen’s vision, the wise approach to it for a tribute record, and the love and attention to detail shown by Brennen and everyone involved makes this not just another tribute, but a heartfelt testament to Lefty’s songs and legacy that is worthy of being reiterated to a wayward country music world.