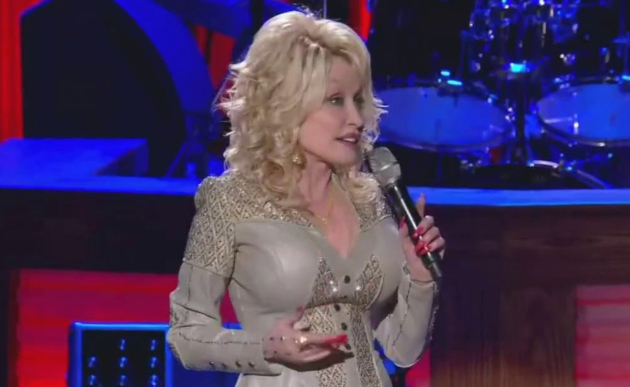 With Black Friday in the offing and the National Broadcasting Company looking to capitalize off of optimal advertising time right before the shopping holiday, a two-hour television special named Dolly Parton: 50 Years at the Grand Ole Opry was aired Tuesday night (11-26) on NBC featuring footage taped back in October as the Opry spent a week celebrating Dolly’s 50th Anniversary as a member. The special also included vignettes captured at the Ryman Auditorium with Dolly talking about her life in country music, and rolls of file footage spliced in here and there spanning Dolly’s Hall of Fame career.

At first it felt like the evening might be if for a bit of a bumpy ride as it appeared Dolly and/or the producers had decided to use a different audio track of her song “9 to 5” than the one Dolly Parton sang live from the Opry stage during the taping. It brought back memories of of the controversy at the Glastonbury Festival in 2014 when Dolly was accused of lip syncing, which she of course denied. But even though some moments may have been slightly doctored in some capacity (“Jolene” and “Coat of Many Colors” also seemed a little circumspect), other performances were definitely sung live as Dolly ran through a litany of her hits, including “Joshua” and “Tennessee Mountain Home.”

Some of Dolly Parton’s best-known songs were also performed by others. So many of today’s newest “country” stars are so immediately off-putting, you almost didn’t mind seeing mid-career Lady Antebellum doing a pretty good rendition of “Islands In The Stream.” Hillary Scott is no Dolly, and Charles Kelley is no Kenny Rogers, but they did a fine job. Toby Keith has so much respect for Dolly Parton, he actually showed up to a performance sober for once, singing “Kentucky Gambler.” Written by Dolly, the song later became a #1 hit for Merle Haggard.

Emmylou Harris came out looking as ravishing as ever, with her hair the color of woven silver, and her warble in her rendition of “To Daddy” as warm as ever. Chris Janson’s version “Muleskinner Blues” was downright killer. Though this Geico caveman look-alike has some of the worst radio singles imaginable, he regularly shows how talented and respectful to country music he is when he takes the Opry stage. This is one of the reasons the Opry recently made Janson a permanent member.

Hank Williams Jr. showed up to deliver a blistering medley of “Mind Your Own Business” and “Move It On Over.” Though he was as boisterous as always at now 70 years of age, the performance felt like it was a little too much Hank, and not enough Dolly. Nonetheless, it afforded even more moments for classic country to be showcased in primetime. Banjo player Buck Trent who was part of Porter Wagoner’s original band came out to perform “The Carroll County Accident” with Dolly. The Mother Church of Country Music—The Ryman Auditorium—got plenty of screen time during the special as well, and so did other country music greats in mentions and photos and film clips played throughout the special.

Dierks Bentley also made an appearance, as did some newer artists who benefited from the primetime airing. Margo Price has performed on Saturday Night Live and most of the late night broadcast shows, but this was the first time she was able to perform on TV before the kids are put to bed. Ohio-native Candi Carpenter also performed.

And of course Dolly Parton ran though all of her classic jokes, told some of her most iconic stories, and soaked up the spotlight after spending 50 years in the service of both the Opry and country music. Her 50th Anniversary was also a bit of a reconciliation with the Opry after a failed theme park venture with the Opry’s parent company a few years back resulted in some bad blood between the Opry and Dolly.

But all of that was resolved and water under the bridge by the time the cameras were rolling for the special. Some of the slickness and stuffiness of overproduced broadcast primetime television (including the doctored audio tracks) left a little to be desired for distinguishing listeners and viewers. But it was a worthy celebration of Dolly, and we won’t ever complain about two hours celebrating Dolly on television.

It’s been said before, and it will be said again: We can’t agree on much these days. But we all agree on Dolly Parton. Dolly Parton: 50 Years at the Grand Ole Opry reminded us of why, and hopefully brought fans of music in country and beyond together at the commencement of the Holiday season.