Review – Eric Church’s “Give Me Back My Hometown” 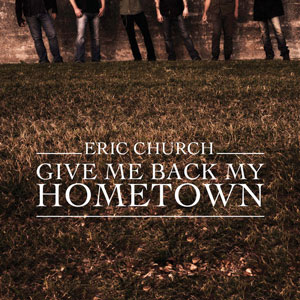 So here it is January 3rd, the day that we were promised that everything would be revealed of why a month ago today, Eric Church’s marketing arm decided to post a psychotic and irresponsible “teaser” video for his upcoming The Outsiders album that depicted a shadowy figure in gloves obsessively watching a video of Taylor Swift explaining on the CMA Awards how it was Eric Church’s arrogant and idiotic torpedoing of a opening spot on a Rascal Flatts tour that eventually led to Taylor getting her big break in country music.

The Eric Church video was so creepy and so ripe to be misunderstood, Saving Country Music posted an expletive-laden tirade and demanded the video be taken down. Eventually it was before a public outrage could be launched, and despite many Church fans proclaiming the video as payback to Taylor Swift for calling out Eric Church on the CMA Awards, (and that it was completely justified, because you know, Eric Church isn’t part of the “in” crowd and is an “outsider”)  a subsequent video explained that Eric Church “adores Taylor,” making Church’s fans have to each their own asses, while Eric Church himself back paddled harder than the Oxford University rowing team in a 4.2 mile heat race on the River Thames.

The video that Eric Church inc. posted in place of their Taylor Swift stalker video urged us all to “stay on course” and that on January 3rd “all will be revealed to you.” And as always with these dumbass teaser videos, nothing was revealed, nothing makes sense, none of the disturbing imagery from the December 3rd video is now somehow justified just because Eric Church released a new song that has nothing to do with any of it. It’s all just a bunch of marketing that distracts from the music and leaves the gawking country music fan wanting and confused, while the fact that the whole run up to Eric’s The Outsiders album is such an obvious ripoff of Shooter Jennings and how he marketed his last album The Other Life goes horrifically under reported.

But there is a new single here that needs to be dealt with called “Give Me Back My Hometown.” The song is very, very trope-like, residing deeply within the well-worn grooves of the often called-upon American music theme of the forgotten hometown and heartland decay. Is it a laundry list song, or as some like to couch it, “bro-country?” No, no it’s not. Is it a country rap? Not even close. Is it an alternative to the trash that permeates the mainstream country music airwaves? Sure it is. But before we proclaim it is something more than just another song, let’s not allow ourselves to reduce our measure of what is good simply because Music Row has deftly extended the boundary of what is positively awful into previously uncharted territory.

At the same time it is not unfair to couch “Give Me Back My Hometown” as a respite from the rest of mainstream male country. And the reason this small town theme works so often is because it resonates in a fairly universal manner, especially amongst country music fans. But the boldness of “Give Me Back My Hometown” is in the musical approach to the song. Once again Eric Church reveals himself on the progressive edge of country sonically compared to his Bon Jovi-esque and country rapping counterparts, delivering a rhythmic, banjo-driven bed that is catchy without feeling cliche, and a melody that reveals Church’s adeptness at carrying feeling in his voice into an impressively-high register.

To the mainstream country ear, “Give Me Back My Hometown” must sound nothing short of foreign and refreshing. But to an ear with a more wide sense of perspective, especially when the heavy bass drum beat and hand claps kick in about 1/3’rd of the way through the song, a strong, pungent Lumineers influence reveals itself quite obviously. A similar observation can be made of Lady Antebellum’s recent single, the banjo and clap-driven “Compass.” Once again we see a symptom of Music Row being 18 months behind the relevancy arch, and just now catching up with what was cool last year, despite feeling cutting-edge within the format.

All those observations aside though, simply based off of the ear test, “Give Me Back My Hometown” is not bad. The song works. And though with his first two singles off The Outsiders Eric seems to be focusing more on music and less on capturing the muse behind the story he wants to convey, give him credit for being willing to trod outside of popular music’s current modes, or at least mainstream country’s.